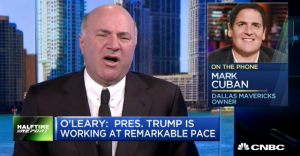 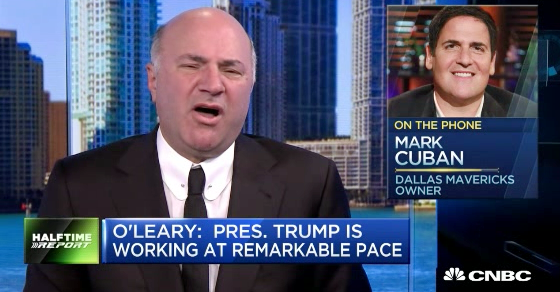 Mark Cuban says Kevin O'Leary is bragging to his American billionaire friends that he could command unchecked power over Canada.

During an appearance on CNBC while he was in Miami, Florida last weekend, the celebrity millionaire and Conservative leadership candidate was challenged by fellow Shark Tank star Mark Cuban, billionaire owner of the NBA’s Dallas Mavericks, to say something on camera that O’Leary told him in private.

“Explain to viewers and listeners what you love about the parliamentary system in Canada,” Cuban told O’Leary.

“Tell them what you told me.”

After a crossfire of banter that saw O’Leary praise the British parliamentary tradition while Cuban repeatedly demand O’Leary confess what he “really liked about it,” the would-be Conservative leader finally spilled the beans:

“The parliamentary system provides more power to the Prime Minister.”

Maybe sensing Canadians could be watching back home, O’Leary stressed that his caucus could act as a check-and-balance on the power of the prime minister, but Cuban insisted: “what you liked about it is that you get carte blanche and you really admire that system.”

Is O’Leary’s faith in the system well placed?

Thanks to strict party discipline and the centralization of power in the Prime Minister’s Office, Canadian prime ministers have increasingly exerted control over a caucus that rarely dissents.

Just ask Senator Mike Duffy how many people are willing to “stand strong and use your power to restrain the unaccountable power of the PMO.”

And speaking of carte blanche power, another feature of the British parliamentary tradition are first-past-the-post elections that often leave majority governments without much in the way of a check-and-balance in the House of Commons – even though they usually receive far less than 50% of the vote.

Of course, Prime Minister Justin Trudeau repeatedly promised the last election would be the last under first-past-the-post until Trudeau’s PMO pushed aside the democratic institutions minister and unilaterally kiboshed Trudeau’s own electoral reform promise.

On second thought, maybe O’Leary has a pretty good idea how the system works after all.