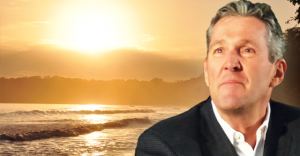 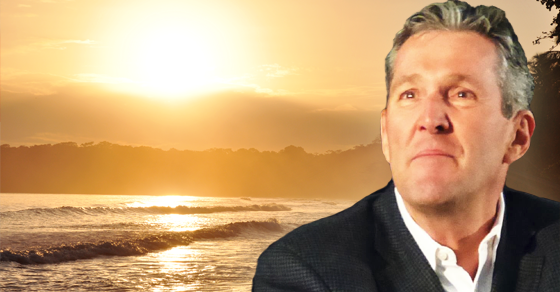 Manitoba PC leader Brian Pallister wasn’t where he said he was when his province declared a state of emergency in 2014.

CBC News reports that at the height of Manitoba’s devastating July 2014 floods, the wealthy Tory leader was soaking up the sun at his vacation home in Costa Rica, despite telling reporters he was tied-up with family in Alberta.

After the emergency, the Winnipeg Free Press asked him why he was “missing in action during the 2014 flood.” Pallister used the excuse that he was at a family wedding in Alberta:

“I was at a family wedding in Alberta in July; the first week of July was when the unprecedented rainfall occurred one day in parts of western Manitoba.”

The wedding was an entire week before the emergency was declared.

Manitoba declared a state of emergency on July 4. Pallister was in Costa Rica between June 29 – July 12.

That isn’t the only time the Tory leader has appeared to be less than forthcoming about his trips to Costa Rica – in another Free Press story earlier this month, Pallister claimed the last time he left Canada was a trip to North Dakota.

In reality, Pallister had already spent 36 days in Costa Rica since the last time he ever stepped foot in North Dakota.

The Manitoba Tories call that a “lapse of memory.” You might call it something different.

An analysis by CBC News shows Pallister has made 15 trips to Costa Rica since taking the helm of Manitoba’s Progressive Conservatives, spending one-fifth of his entire time as leader out-of-province in the tropical Central American country.

The Tory leader said he only has a couple thousand dollars in the account and strongly denied using the account to stash away money in a “tax haven.”

Pallister has refused calls to publicly disclose his tax returns.

Guess you’ll just have to take his word for it.