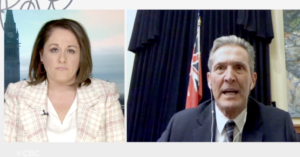 Things got a little heated when Manitoba Premier Brian Pallister appeared in a televised interview with CBC News Network over the weekend.

Asked why his Restart Manitoba plan had failed to effectively prepare the province over the summer for a second wave this fall, Pallister accused Barton of “Monday morning quarterbacking” and asked her why she hadn’t offered him a “single idea” that would have made his plan work:

Barton: “But Premier, if you have had more people die in the past week  than in the past seven and a half months, forgive me, but it doesn’t sound like your plan worked over the course of the summer.”

Pallister: “Well that’s great except that, Rosemary, to be fair, you haven’t come up with a single idea in this interview that would have made this plan work better.”

Barton: “Premier, I am not an elected official.”

Barton: “Premier, I am not an elected official. I am asking you why you didn’t move faster to protect the people of your province, sir.”

Manitoba currently has the highest per capita rate of infections in Canada, earning Pallister heavy criticism from health experts over his handling of the pandemic.

Earlier this year, Pallister rushed to make Manitoba the first province in Canada to re-open its economy after the first pandemic lockdown.

In early November, over 200 doctors signed an open letter to Pallister, asking for “the most aggressive possible response” to manage spiking case numbers.

Records obtained by PressProgress show that Pallister travelled to his Costa Rican luxury villa and was absent for weeks while Manitoba was planning its pandemic response earlier this year.