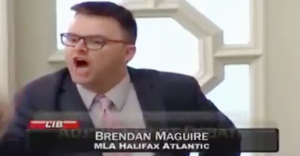 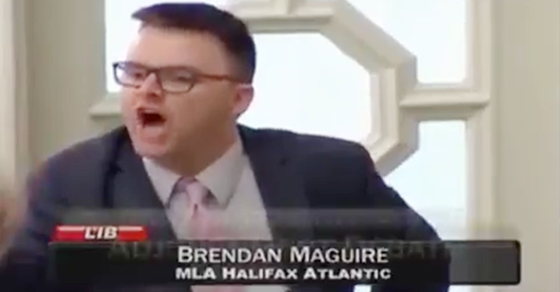 You'd think it was his rights getting stripped away and not the other way around.

How do we explain Liberal MLA Brendan Maguire’s temper tantrum at the Nova Scotia Legislature?

The backbencher in Stephen McNeil’s Liberal government got so fired up, you’d think it was his rights getting stripped away and not the other way around.

During a debate on education funding last week, Maguire seemed to get a little worked up by the presence of a group of school teachers watching proceedings from the legislature’s gallery above.

Pointing up at the teachers, Maguire yelled this at an opposition MLA:

“What a show, what a show. When I listen to the member for Pictou East speak, my favourite part is that he likes to scan the crowd to see who’s up there. I have two minutes, so you’re going to sit here and listen. We are sick and tired of people like you telling us that our community isn’t [inaudible] …”

Why would Maguire feel distressed by the presence of school teachers?

Prominent labour leaders like CLC President Hassan Yussuff and Danny Cavanagh of the Nova Scotia Federation of Labour have warned the government its actions are likely in violation of the constitutionally-protected right to strike:

“We’re dumbfounded by Premier McNeil’s actions last week. He marked National Teacher Appreciation Week with legislation that erodes the ability of teachers to negotiate a fair contract, keeps wages behind the rising cost of living and guts long-service awards. The legislation also makes it harder for teachers to advocate for better learning conditions for their students …

The Supreme Court of Canada has sent a very strong message to every provincial government that negotiating in good faith and respecting the collective bargaining process is the law. Last November, our highest court, which can take months to deliver a decision, took just 20 minutes to rule that the government of British Columbia had violated Canada’s Charter of Rights and Freedoms when it used legislation to strip rights from teachers’ collective agreements — legislation similar to Premier McNeil’s Bill 75.”

After passage of the bill, school teachers filled the streets of Halifax, with many suggesting they won’t be letting this one go:

#Bill75 has passed. And they’re not happy. The premier is in that SUV #nstu #NSteachers pic.twitter.com/uHuvNyoZKJ