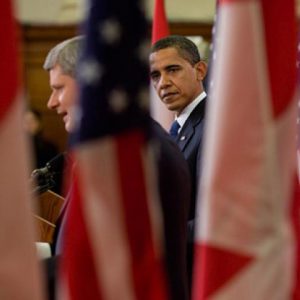 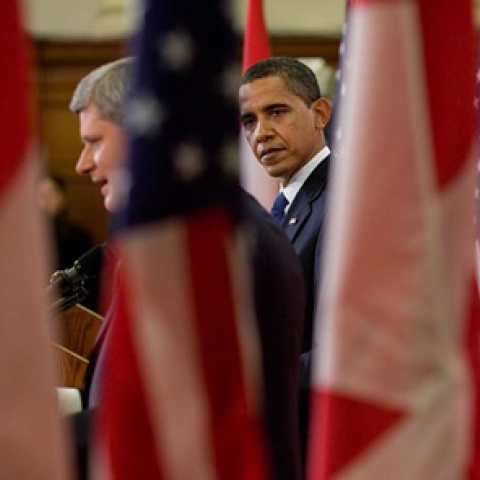 Updated Feb. 20 Prime Minister Stephen Harper had a chat with U.S. President Barack Obama on Wednesday during the North American Summit in Mexico, and word on the street going in was that the PM’s frustration with Obama over the proposed Keystone XL pipeline would make this one “the frostiest since the annual meetings began […]

Prime Minister Stephen Harper had a chat with U.S. President Barack Obama on Wednesday during the North American Summit in Mexico, and word on the street going in was that the PM’s frustration with Obama over the proposed Keystone XL pipeline would make this one “the frostiest since the annual meetings began almost a decade ago.”

Given the serial missteps on the climate change file by the Harper government, shouldn’t Obama be the one who’s frustrated with Harper?

Obama certainly sounded that way on Wednesday when he gave Harper “a primer on reducing greenhouse gases as he answered a question about why he has not approved the Keystone XL pipeline.”

“I said previously that how Keystone impacted greenhouse gas emissions would affect our decision. But frankly, it has to affect all of our decisions at this stage because the science is irrefutable,” said Obama, who flagged “severe weather patterns” as having “consequences for our businesses, for our jobs, for our families, for safety and security.”

Obama added: “We only have one planet.” That’s why “we do have to point to the future” to influence other big emitters such as China and India, and “have leverage” over them.

To put Obama’s pointed comments in context, here’s some of the baggage Harper brought to Mexico:

“There’s always a debate around science and what’s changing.”

“This cold weather can’t last forever. This global warming has to stop some time.”

“My problem is with the words ‘climate change.’ I don’t know what those words mean because they’re a buzz phrase. Climate change. If we’re talking about what is our preparedness for natural disasters, that’s one thing, but climate change, if you want to talk about the climate, the climate always changes. It goes hot. It goes cold, etc.”

Dragging his feet on oil and gas regulations

After repeatedly promising over the years that regulations for the oil and gas sector to curb greenhouse gas emissions were imminent, Harper just bought himself a few more years. In a year-end interview, he said not to expect a plan to reduce climate pollution for another “couple of years.”

Even with regulations, we already know that Canada will fail to meet its watered-down target of reducing greenhouse gas emissions by 17 per cent of 2005 levels by 2020.

Attacking environmentalists, not the problem

If only Natural Resources Minister Joe Oliver, who accompanied Harper to Mexico this week, tackled the challenge of establishing ground rules for balanced resource development as ferociously as he attacks environmentalists.

Oliver set the tone for the government’s unbalanced approach a few years ago when he attacked “environmentalists and other radical groups” for threatening “to hijack our regulatory system” and kill pipeline projects.

“Their goal is to stop any major project no matter what the cost to Canadian families in lost jobs and economic growth. No forestry. No mining. No oil. No gas. No more hydro-electric dams. These groups threaten to hijack our regulatory system to achieve their radical ideological agenda. They seek to exploit any loophole they can find, stacking public hearings with bodies to ensure that delays kill good projects. They use funding from foreign special interest groups to undermine Canada’s national economic interest. They attract jet-setting celebrities with some of the largest personal carbon footprints in the world to lecture Canadians not to develop our natural resources.”

Harper considers the proposed Keystone XL pipeline a “complete no-brainer,” so he doesn’t understand why Obama hasn’t jumped on board. Harper’s view? “You don’t take no for an answer.”

The reality, though, is far more complicated.

“Building a 800,000 barrel-per-day pipeline of the world’s dirtiest oil will mean more tar sands dug up and burned, and more carbon pollution.” That’s the opposite of a no-brainer. Besides, the Obama administration views the world differently.

U.S. Secretary of State John Kerry made that clear on Sunday in a speech in Jakarta earlier this week, when he put climate change deniers in the same category as people who believe the Earth is flat.

Obama himself sounded nothing like Harper government during his recent State of the Union address.

“But the debate is settled. Climate change is a fact. And when our children’s children look us in the eye and ask if we did all we could to leave them a safer, more stable world, with new sources of energy, I want us to be able to say yes, we did.”

Photo: us_mission_canada. Used under a Creative Commons BY 2.0 licence.