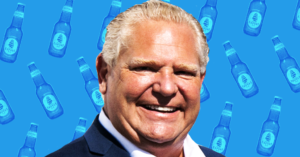 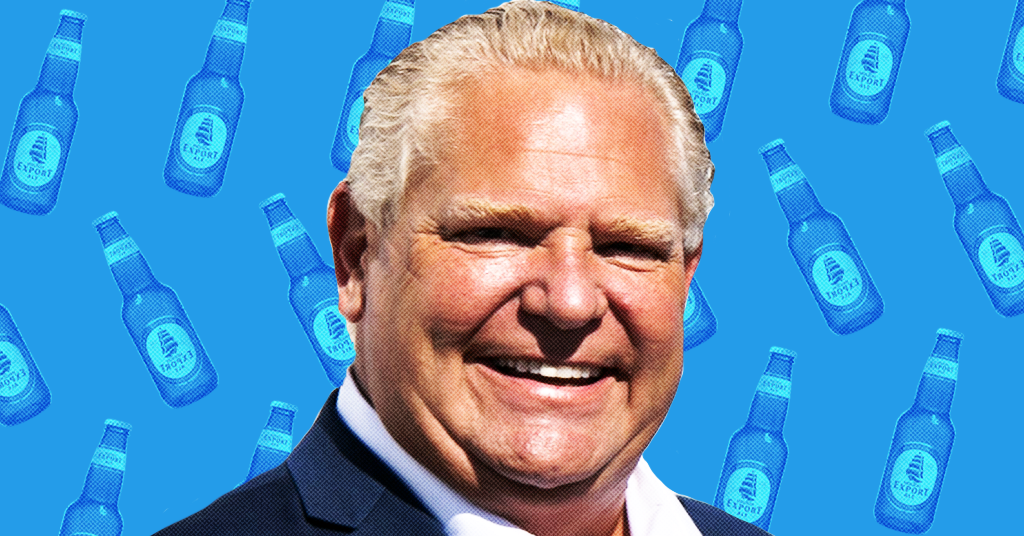 Leaked slides show Doug Ford’s government is quietly considering making changes to rules that would allow beer and wine companies to opt out of the province’s bottle return program.

According to Power Point slides newly obtained by PressProgress, a working group organized by Ontario’s Ministry of the Environment, Conservation and Parks delivered a presentation in July indicating the government is considering  changes to regulations on beer and wine packaging that would allow companies to treat their bottles as normal “Blue Box” waste.

Advocacy groups warn that change would effectively undermine Ontario’s Deposit Return Program (ODRP), a program that has posed challenges for the lobby groups behind Ford’s beer and wine agenda.

The ODRP uses the physical locations of Ontario’s Beer Stores and LCBO locations to recycle empty alcoholic containers — customers get back a deposit fee when the container is returned.

The July 6 presentation proposes a new approach, one that “treats producers of alcoholic beverage containers the same as other beverage producers.” 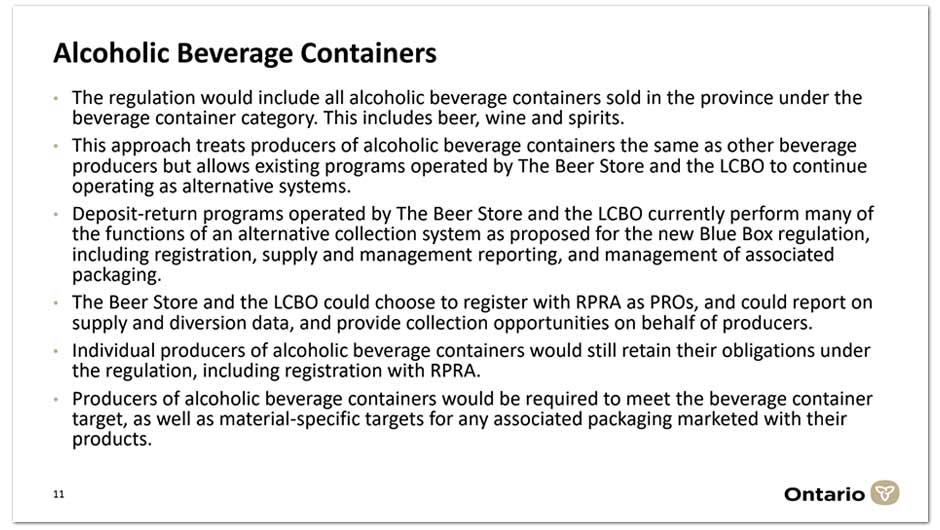 Leaked slide from Ontario’s Ministry of the Environment, Conservation and Parks

While the Beer Store and LCBO would still collect empty containers, the slides state that they would operate as “alternative systems” wherein:

While brewers who use refillable bottles may still opt-in, “brewers who only use cans, or one-way bottles, could find that belonging to the common collection system saves them money.”

“Given that the proposed target for beverage containers is lower than the current performance of the deposit system for alcoholic beverages, it is likely that many, especially smaller brewers that do not use refillable bottles, would choose to leave the deposit program and opt-in to the common collection system,” Wallis added.

Environmental Defence says the government’s plan would likely include a “de minimis,” where “producers below a certain benchmark (volume, annual sales, etc.) have no financial obligation to the system.” That could further motivate companies to opt-out of the existing LCBO / Beer Store program.

The group has been raising a number of concerns over the Ford government’s plans to overhaul the Ontario’s Blue Box program.

“One of the keys to the success of the ODRP and the brewers’ recovery and recycling program is they are focused on recovery and reuse of alcohol containers exclusively,” Nock told PressProgress, adding that the program’s “recovery rates are among the best in the world.”

“The recovery rate for beer bottles is 97%. These bottles were able to be reused an average of 15 times before being recycled into new glass. 79% of wine, spirit, cooler and non-beer containers were similarly recovered.”

“It these go to the Blue Box, they will be contaminated with food remnants and they’ll be unable to be re-used,” Nock explained.

“Best case scenario is they’ll be recycled for one-time use in things such as paving materials. More likely, they will be sent to the landfill.”

That view is widely shared by experts — University of Toronto Rotman School of Management professor David Soberman told CBC News last year the program was “one of the most advanced and efficient recycling programs in the world.”

Ontario’s Ministry of the Environment, Conservation and Parks did not provide a response to questions about the leaked slides after a ministry spokesperson initially indicated to PressProgress that it would.