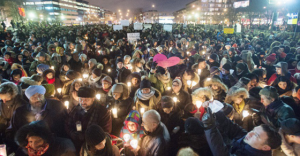 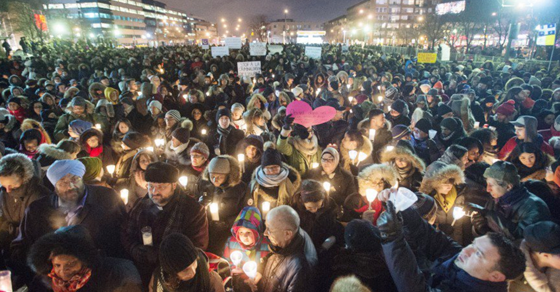 Canadians across country shared inspiring photos of their communities rallying against hate.

Even when things seem darkest, you can always find a glimmer of hope.

Last night, in response to Sunday night’s terrorist attack targeting a Québec City mosque, thousands upon thousands across Canada took to the streets in cities and towns, large and small, for vigils honouring the victims.

Canada has a lot of problems we need to figure out when it comes to racism, but the thousands of Canadians spontaneously showing up at vigils from coast to coast to coast are an example of a good way to respond to hate – by showing you’re willing to get up and stand in defiance of hate.

The Quebec City vigil has overflowed out into the streets. pic.twitter.com/n9APb6pjuK— Catherine Cullen (@cath_cullen) January 30, 2017

Scrolling through pics of tonight’s #Montreal vigil in support of #QC‘s Muslim community. This one by @madocstudio took my breath away. ❤️ pic.twitter.com/Rr0tcInwra

Tremendous turnout at tonight’s candlelight vigil in #Halifax for victims of the Islamophobic shootings in Quebec.#NSpoli #cdnpoli #canlab pic.twitter.com/dZTSe4Q6gR

Did my best to help out at vigil/rally at #UWaterloo this afternoon over the recent tragic events in Sainte-Foy. #WeAreAllCanada pic.twitter.com/5GL7uwQdyz

My kids at their first vigil. Sending love and solidarity from Winnipeg to #QuebecMosqueAttack victims.#neveragain#WeAreAllMuslims pic.twitter.com/U9hpJPElTm

Inspiring to see more than 300 compassionate people at Regina Vigil in support of Quebec City. Thank you. #QuebecMosqueShooting #skpoli pic.twitter.com/MnPuT3aglk

Vigil for the victims in St Foy Quebec at the #ableg tonight. From prayer to action for us into the future. Canadian values: inclusion! pic.twitter.com/xjFxTf1yYc

-16 and Yellowknife’s standing outside @ Islamic Centre of #Yellowknife for vigil #QuebecCityMosqueShooting pic.twitter.com/bKFudYgIoC

Sincerely expected MAYBE Two Dozen, at most, to turn out tonight in #Vancouver for the Vigil.

Hundreds gather at vigil for victims in Quebec City in Victoria in collaboration with Muslim community. #yyj pic.twitter.com/P349B3eiqT