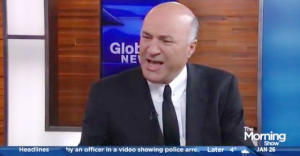 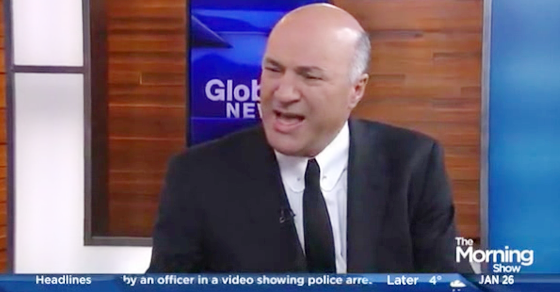 O'Leary painted the female business leader as a "very emotional" woman who is unable to "separate her emotions" from her judgment.

Kevin O’Leary’s bid for leader of the Conservative Party of Canada is going exactly as you expected.

Appearing on Global Toronto’s Morning Show early Thursday, the Conservative leadership candidate brushed aside criticism from one of his former female Dragons’ Den co-stars, dismissing her words as the ravings of a “very emotional” woman.

“You get a window into somebody’s character by the way they treat people, particularly those who are vulnerable and need help or guidance. Kevin’s total lack of empathy toward these Canadians who put their heart and soul on the line, I can assure you, was genuine.”

O’Leary responded by suggesting a link between Dickinson’s gender and emotional states, painting the female business leader as a “very emotional” woman who is unable to “separate her emotions” from her judgment:

“I’ll say something else: Arlene is a very passionate woman, very emotional. She was never able to separate her emotions from her investment decisions which is why she did so poorly on that show.”

Without elaborating, O’Leary also claimed he’s “learned” Dickinson is planning to run for the the Liberal party – although last week, Dickinson explicitly stated “I’m not running.”

It’s a bit strange O’Leary would float that kind of innuendo considering O’Leary has donated to Liberals and not Conservatives in the past.

There’s also some irony in a man who is prone to gaffes and hot-headed outbursts questioning the professional judgment of female colleagues or criticizing them for doing business “poorly.”

In an interview with CBC last week, Dickinson recalled O’Leary’s disastrous time at Mattel when the reality TV star lost a billion dollars and sent the company’s stocks plummeting:

UPDATE: Following publication of this report, Dickinson responded to O’Leary in Maclean’s:

“…Kevin went on to say my concerns aren’t legitimate because I’m an ’emotional woman.’ Specifically, I was so emotional, I ‘was never able to separate [my emotions] from [my] investment decisions,’ which is why I ‘did so poorly.’

Denigrating women has become something of a trend for Kevin-the-candidate.”