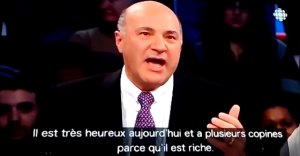 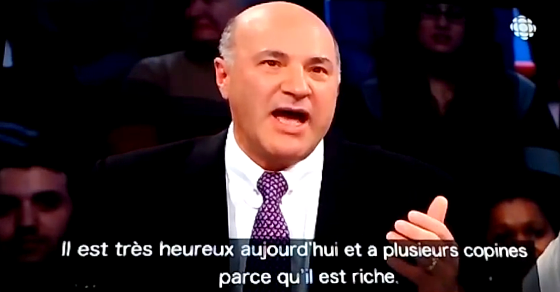 Kevin O’Leary’s advice to students: if you’re wealthy, you can have ‘many girlfriends’

"Let's be realistic about this and pragmatic. Which one is easier to replace: the business or your girlfriend?"

And unless he can persuade social conservatives to change their attitudes towards polyamory, it likely won’t include family values voters either.

O’Leary hasn’t officially entered the race to replace Stephen Harper, and his Conservative leadership rivals suggest he’s stalling because he doesn’t want anyone to know how bad he is at speaking french.

Sure enough, O’Leary plans to sit out Tuesday night’s french-language debate in Québec City – but he says he’s taking lessons and predicts he’ll be able to speak french by 2019.

I invite Kevin O’Leary to join the race in time for the Quebec City french language Leader’s debate. https://t.co/SYH2XWdQ5N

He could probably use the practice. During a 2014 appearance on Radio-Canada’s popular Tout le monde en parle talk show, O’Leary wore an earpiece and responded to French questions in English.

Though nothing was lost in translation when TLMEP host Guy Lepage asked O’Leary if being rich is worth the cost, wondering whether a “prosperous entrepreneur” can strike a work-life balance and still be an equal partner parenting a child.

Replying in English, the celebrity millionaire shared an “anecdotal story” about a business student who once approached O’Leary seeking love life advice, confessing his fiancé recently told him: “I can’t stay with you anymore, you have no time for me, you’re all consumed – school all day, business all night.”

“If you don’t start spending time with me,” the fiancé said, “it’s over between us.”

“What do I do Kevin?” the student asked.

“Let’s be realistic about this and pragmatic. Which one is easier to replace: the business or your girlfriend? … The answer is this, he is very happy, he has many girlfriends because he’s very wealthy now.”

TLMEP’s guests and studio audience seemed to think that was pretty lousy advice.

Have to wonder if voting members of the Conservative Party of Canada think dumping your fiancé for “many girlfriends” is lousy advice too?