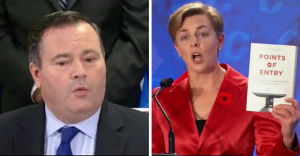 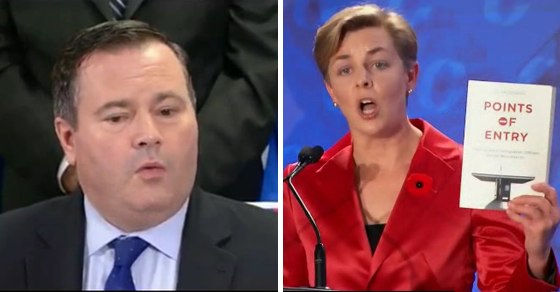 Campaign manager Nick Kouvalis was up until 1 AM firing off nearly 80 consecutive tweets defending his candidate's draconian proposal to screen immigrants for "anti-Canadian values."

If you notice any barbaric cultural practices or anti-Canadian activities on your way to the corner store, Conservative leadership candidate Kellie Leitch’s campaign manager has a few ideas about who to blame.

Leitch – a well-connected Tory insider, former Harper cabinet minister and deeply awkward Donald Trump impersonator – would like us all to believe Canada’s immigration system is “unhealthy and dangerous.”

But until now, Leitch has had trouble explaining why she’s so paranoid about an immigration system that her own party was in charge of running for the last decade.

And by the way, who was immigration minister for most of that decade? Oh yeah, it was Jason Kenney.

If you were on the Internet at 1 a.m. last week, you may have noticed Leitch’s campaign manager Nick Kouvalis fired off roughly 80 consecutive tweets defending his candidate’s draconian proposal to screen immigrants for “anti-Canadian values.”

That stings, especially considering Leitch waived the same expert’s book around in the air during last week’s Conservative leadership debate, claiming the book proves her point:

The name of the book is Points of Entry: How Canada’s Immigration Officers Decide Who Get In, written by McMaster sociology professor Vic Satzewich.

Satzewich told iPolitics he thinks Leitch’s anti-Canadian values test is a “terrible idea” and doesn’t agree with any of her conclusions about his book. So Kouvalis decided to dispute the author’s interpretation of his own book.

But while Kouvalis was doing that, he let something slip about former immigration minister Kenney.

Citing the book’s conclusion, Kouvalis tweeted that although “the trend” began earlier, it was under Kenney’s “guidance” that immigration officials were “cut off from the immigrants” and “face-to-face interactions with applicants became increasingly rare.”

The original context of the passage cited above actually relates to dubious statements Kenney made in his 2013 farewell letter as citizenship and immigration minister.

Kenney claimed many immigrants “remember with great fondness” the immigration officers “who interviewed and took a chance on them” – Satzewich points out those interviews were largely eliminated during Kenney’s time as minister:

“Though the trend to waive interviews in relatively ‘straightforward’ cases arose during the late 1990s, before Kenney was appointed minister, under his guidance officers were progressively cut off from the immigrants (and visitors) whom they selected. Their face-to-face interactions with applicants became increasingly rare, with the result that most now see only a small handful of the thousands of people whose files they will process during their careers.”

Kouvalis says this validates the idea of having immigration officers screening immigrants for “anti-Canadian values.”

However, Kouvalis avoids quoting the next paragraph, where Satzewich writes that the old immigration system gave immigration officials arbitrary powers and was “unabashedly racist”:

“At the same time, one should not be too nostalgic about the past. A little over fifty years ago, Canada’s immigration system was unabashadly racist. Officers had a wide range of discretionary authority that empowered them to select white immigrants, who were seen as better nation-building material than non-whites.”

He said he found no evidence, however, that they’re regularly making bad or risky decisions.

“As a result of doing the research, I have a lot more confidence in the immigration system and seeing how visa officers work. They’re actually very conscientious. They’re concerned about applying the law correctly and being balanced in their decision-making,” he said.

“In no way shape or form do I ever argue, or will I ever think, that it is a good idea — or even a sensible idea — to test for Canadian values. But that’s a conclusion that she draws from (the) observations that I make. That’s certainly not my conclusion” …

“Every year, visa officers process 1.3, 1.4 million visa applications. Can you imagine doing interviews with 1.3 or 1.4 million applicants? It’s going to bring the immigration system to a grinding halt,” he said.

“We need to screen people to make sure that they have this value of working hard? It’s crazy, right?”

For his part, Kenney has condemned Leitch’s proposal and suggested her interest in immigration issues is not sincere.

“I don’t take her position seriously,” Kenney told the Globe and Mail in September.

Already several candidates and interim Conservative leader Rona Ambrose have denounced Leitch’s proposal, with one candidate suggesting her proposal poses a threat to social conservatives – Leitch herself would not rule out banning Catholics either.

And there are further signs that Leitch’s descent into xenophobia is opening wide divisions in the Conservative party base.