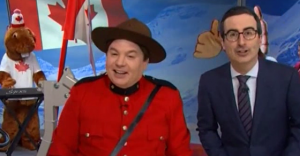 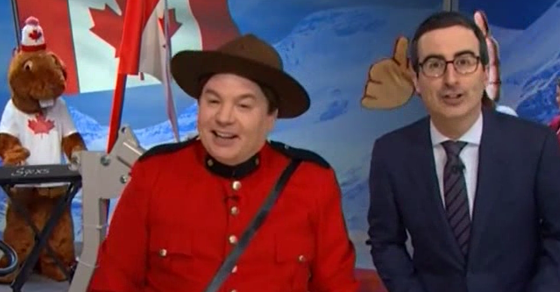 If you're thinking of building an election campaign around singling out and demonizing one community of Canadians, be prepared to get branded an "evil" bigot and a "complete and utter dick head" on one of America's top cable comedy shows.

If you’re thinking of building an election campaign around singling out and demonizing one community of Canadians, be prepared to get branded as “evil” and a “complete and utter dickhead” on one of America’s top cable comedy shows.

“Harper’s ugliest tendency is pandering to Islamophobes,” Oliver says during the segment.

“Earlier this year, his government passed a law called the ‘Zero Tolerance for Barbaric Cultural Practices Act’, stiffening penalties for things like honour killing and polygamy despite the fact both of those things were already illegal in Canada.”

Oliver also mocks Harper’s “barbaric cultural practices hotline,” which he says isn’t really necessary given “the fact that 9-1-1 continues to exist in Canada.”

And as for the issue of the niqab: “if Harper was happy to let Canadians interact with the government like this,” cutting to a photo of Harper with Justin Bieber wearing overalls and a backwards hat, “she should be able to wear whatever the f–k she wants.”

“Totally fair,” Myers nods in agreement. “I think he made that pretty clear.”