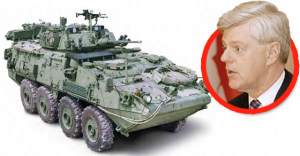 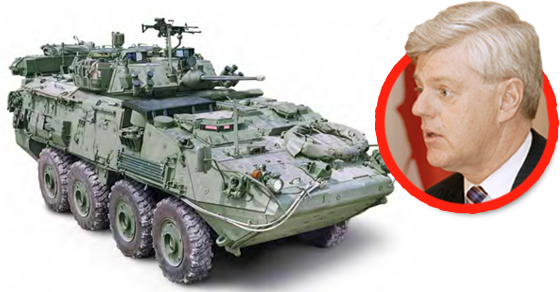 Canada's former Deputy Prime Minister sure knows how to put everything in perspective!

Canada’s former Deputy Prime Minister sure knows how to put everything in perspective!

“Canada, it should be pointed out, is not supplying the Saudis with equipment that can be used in torture or persecution of women. We are selling military vehicles — basically fancy trucks — of the sort that are required by any country’s armed forces, and which we happen to be good at making.”

What makes those “trucks” so “fancy,” “basically”?

One guess could be that the armoured vehicles (similar to the one pictured below) will be outfitted with 105mm guns: According to General Dynamics, the company that manufactures the armoured military vehicles, the LAV-IIIs “combine versatility, survivability, lethality and maneuverability to handle a wide array of missions” and is armed with enough “effective firepower to defeat soft and armoured targets.”

So, to sum up, John Manley thinks that’s a fancy truck.

But what else does Manley think? 5. The Death Star is basically a really bright laser pointer