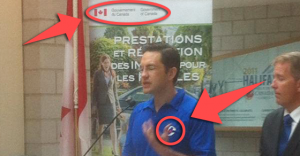 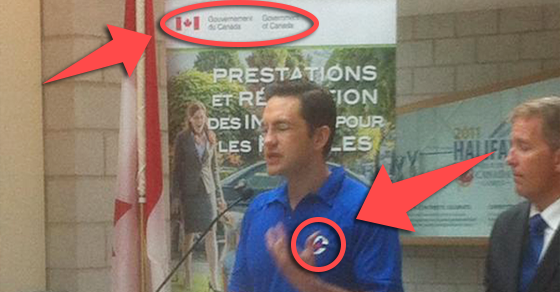 Questions are emerging – yet again – about Employment Minister Pierre Poilievre’s apparent use of public money for partisan campaigning.

That event, funded by taxpayers, was aimed at promoting the so-called “Universal Childcare Benefit” – a monthly baby bonus that doesn’t actually create one child care space and covers only a fraction of childcare expenses.

Now Poilievre is being accused again of blurring the lines between public and party business, this time after wearing a Conservative Party of Canada polo shirt to an official Government of Canada event Monday in Halifax that was, once again, organized on the public dime:

After Halifax reporter Andrew Pinsent tweeted an image of Poilievre delivering a speech in front of a Government of Canada podium, several Twitter users wondered about the ethics of a Minister of the Crown wearing Conservative Party swag at official government announcements:

Hey, Ethics Commissioner @CIEC_CCIE – should a Minister of the Crown be wearing a party logo at a govt announcement? pic.twitter.com/6yAwG8ALL3

Note CPC golf shirt. Is it a campaign event or a government of Canada event? Is there a difference now? https://t.co/AFYaI98hJF

In a 2010 ruling on Conservative MP Gerald Keddy’s use of an oversized novelty cheque branded with the Conservative Party logo at an official government event, Ethics Commissioner Mary Dawson said that “public spending announcements are government activities, not partisan political activities, and it is not appropriate to brand them with partisan or personal identifiers.”

While Dawson explained in her ruling that existing legislation only covers scenarios where MPs use public resources to promote their own private interests, she noted, “I am of the view that the practice of using partisan identifiers in announcing government initiatives goes too far and has the potential to diminish public confidence in the integrity of Members and the governing institutions they represent.”

However, opposition New Democrats argue Poilievre’s fashion statement may have violated the government’s internal communications policies, pointing out that the Guide for Minister’s and Ministers of State states:

“…you must ensure that neither you nor your staff seek to engage public servants in work that is outside their appropriate, non-partisan role.”

On Sunday, Poilievre also came under fire for likening UCCB cheques to “Christmas in July,” which also raised questions about blurred lines:

One more sleep until Christmas in July for Moms and Dads! #UCCB #YourKidsYourWay pic.twitter.com/lVGwdQF07P

Effectively Poilievre is pitching this as a gift from the Conservative Party to parents — a gift, we are to understand, that came out of…

… the Conservatives’ own pockets. The implication is inescapable. For clearly parents are expected to feel grateful for this gift — …

Truly, I am gobsmacked. “Hey, let’s say — right out loud — that voters are like children and Santa Harper’s got a present for them. Idiots.”

Hooray! It’s Christmas in July! And look! Santa Harper gave me this infantilizing message and a condescending pat on my little head!

NORAD will be tracking your tax dollars as they come down the chimney tonight.

A recent analysis by the Canadian Press shows the UCCB baby bonus will predominantly go to voters in the suburbs in Toronto and Alberta – ridings Conservatives need to hold on to power. A separate analysis by CBC News found Poilievre’s UCCB announcements have predominantly occurred in battleground ridings.