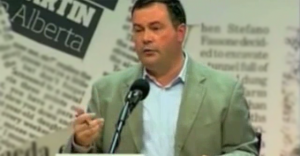 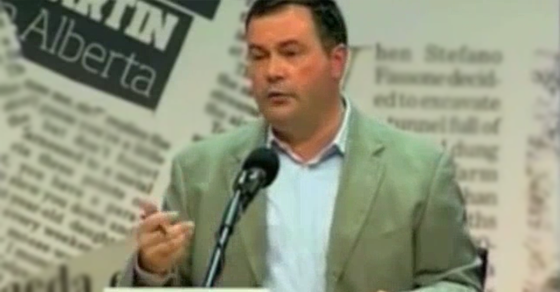 And the best example he can think of is "when the British conquered the French in New France."

Jason Kenney suggests the imperial adventures of the “British Empire” a few hundred years ago can teach 21st century Canada a thing or two about doing multiculturalism right.

And the best example he can think of is “when the British conquered the French in New France.”

And if that’s not enough, he also appears to be repeating a far-right conspiracy theory alleging Marxist academics are working to “suppress” Canada’s “Christian patrimony.”

Video from his appearance on a panel about “the root of democracy” at an Italian religious conference in 2012 shows Kenney arguing Canadian multiculturalism is an “inheritance” from what is “best about British liberal imperialism.”

Kenney says this is because the “British Empire” – the same folks that implemented assimilation policies, divide and rule and deported everybody from Nova Scotia – had “a brilliant capacity at accommodating difference.”

While Britain’s imperial history is remembered very differently by different communities, Kenney’s claim that the British Empire “did not seek to assimilate” New France but instead “invited them” to preserve their language, laws and institutions looks like it has a few holes in it.

As far as invitations go, the Royal Proclamation of 1763 did a number of things, including abolishing French civil laws, weakened the Catholic Church and banned Roman Catholics from participating in government.

And after the Patriotes’ 1837 Lower Canada rebellion, Lord Durham’s Report called for the French to be fully assimilated by the British:

“…it must henceforth be the first and steady purpose of the British Government to establish an English population, with English laws and language, in this Province, and to trust its government to none but a decidedly English legislature.”

So where in the heck is Jason Kenney getting all his history from?

Could it be the same place where he heard “Marxist” academics are plotting to “suppress” Canada’s “Christian patrimony”?

None were aware of any link between “the Frankfurt school of Marxists” and the origins of multiculturalism, despite Kenney naming them as the ones who “introduced” the idea “into public discourse” in Europe.

However, a report earlier this year in the U.K.’s Guardian newspaper describes the link between multiculturalism and the “Frankfurt School” as a “crazy-mirror history” that was itself introduced into public discourse by America’s religious right.

And casual Google searches show the theory endorsed by the Alex Jones conspiracy theory Infowars website, at least one former grand wizard of the Knights of the Ku Klux Klan and Norwegian terrorist Anders Breivik.

The Southern Poverty Law Center has called it a “conspiracy theory with an anti-semitic twist,” an attempt to blame America’s changing culture from the 1960s onwards on “a tiny group of Jewish philosophers who fled Germany in the 1930s”:

Although the way Kenney tells the story, the “radical Marxist” multiculturalism of Europe serves as a completely made-up boogeyman to contrast against his own particular vision of multiculturalism.

It’s not the only time Kenney has talked about this theory either.

In 2012, Kenney bragged to the Huffington Post about changing “the public discourse” on multiculturalism, claiming Canada’s approach to multiculturalism under Harper is different from “the extreme kind of Frankfurt School Marxism that has unfortunately characterized the European idea of multiculturalism.”

Kenney went on to scold the “politically correct consensus” for refusing to label certain cultural practices as “barbaric,” saying they’ve adopted “a kind of caricature of a politically correct, culturally relativist iteration of multiculturalism – where anything goes.”