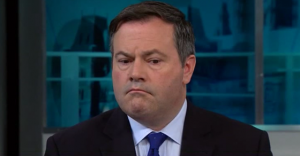 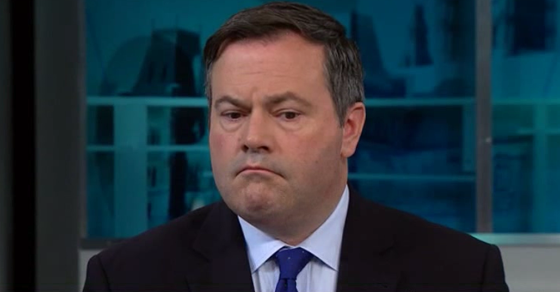 It’s official: Jason Kenney is just making stuff up about the economy

Last week, Conservative candidate Jason Kenney boasted Canada is “the only country in the world” to eliminate its deficit. It turns out that statement was entirely false.

Now this week, Kenney is going on TV and insisting that the gradual shrinking of the Canadian economy over the last several months is hardly a “recession” – rather, in Kenney’s words, it is merely a “discrete sectoral downturn.”

“Most economists define a recession as a widespread downturn in the economy,” Kenney said Sunday in an interview with the CBC. “What we know is we have a clear sectoral downturn in oil and gas.”

“Other sectors of the Canadian economy, other regions continue to grow,” Kenney added.

Statistics Canada will let us know on Tuesday if Canada’s in a recession or not, but we already know Kenney’s suggestion that only the oil and gas sector is down while other sectors “continue to grow” is completely false: “The decline in May was mostly a result of contractions in manufacturing, mining, quarrying, and oil and gas extraction as well as wholesale trade,” says Statistics Canada’s latest GDP report released at the end of July.

Even economists affiliated with right-wing think tanks acknowledge “manufacturers have compounded rather than offset the weakness in the oilpatch, cutting production 3.7 per cent so far this year.”

But in fairness to Kenney, he isn’t the first to advance this factually incorrect storyline. Similarly, Harper also recently claimed “80 per cent of the economy is healthy and growing,” a claim the Canadian Press found to be full of “a lot of baloney.”

CP points out Harper’s claim can be traced back to a chart found in a recent Bank of Canada report that does “not go into detail about other sectors and their growth.”

Instead, CP notes that “Statistics Canada’s GDP analysis shows unequivocally that there is hardship in the industrial and manufacturing sectors – above and beyond the contraction of the energy sector.”