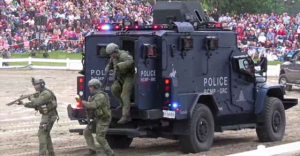 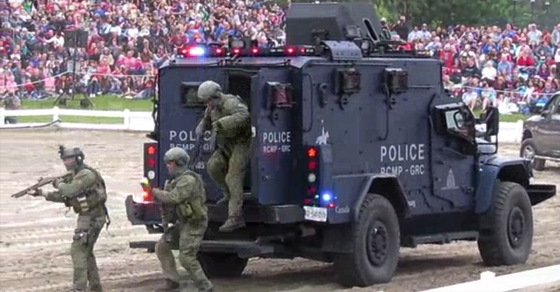 The Musical Ride or a Musical Raid?

Does that sound like the Musical Ride you remember seeing as a kid?

A video posted to Youtube Sunday is raising questions about whether holding RCMP Emergency Response Team demonstrations at the Musical Ride is in keeping with event’s traditionally family-friendly character?

The tactical unit first stops an SUV, deploys a stun grenade and pulls a an actor performing the role of a criminal out of the window of a truck. Shortly after, a black humvee arrives and three tactical officers storm a shed and remove a second actor hiding inside.

“Yeah, and don’t forget to shave,” the announcer can be heard saying over the public address speakers.

Frank Koller, a former CBC correspondent, was at the Ottawa Musical Ride Saturday night. Writing on his blog, Koller described the event as “tasteless” and “jingoistic” and questioned whether it was age-appropriate for children:

But within minutes of the show’s opening – and well before the amazing horses performed their fantastic routines – the audience is treated to a bombastic, paramilitary show-and-tell that had many adults around us shaking their heads in bewilderment. And a few little kids crying too.

The Musical Ride’s website promotes the “spectacle known around the world” by highlighting the red serge, police horses and charitable causes. Things you’d expect at the Musical Ride.

Yet the RCMP makes no mention of the less well known use of paramilitary tactical units in their spectacle, something they appear to have introduced in the last several years. The use of stun grenades and mock police raids is curiously absent from a Shania Twain promotional video used to pitch families on the event:

Responding Monday afternoon, an RCMP spokesperson attempted to distance the Musical Ride from the Emergency Response Team demonstration, stating “the ERT demonstration is not part of Musical Ride performances anywhere other than at Sunset Ceremonies in Ottawa.”

Nonetheless, many reacting on Twitter Monday seemed to find it difficult separating the two. And many questioned whether these kinds of demonstrations are age appropriate for young audiences:

I get the RCMP is going to train for such scenarios. Not sure it should be a floor show, though. Not meant to be entertainment, surely.

Can someone file an ATIP to figure out who decided this idiocy was a good idea at a kid-filled Musical Ride? pic.twitter.com/nqPQXdlUlq

A very different musical ride than I remember. https://t.co/G1PtemWZlh

To save money, RCMP to remove horses from historical Musical Ride http://t.co/SxXvEAhUka

Update: The RCMP responded to PressProgress Monday afternoon, stating that the Emergency Response Team demonstration has been held for about 10 years but is only part of the annual Sunset Ceremonies held in Ottawa.

“What you have seen on video and has been reported in the media is the Emergency Response Team (ERT) demonstration which was held on two of the scheduled five evenings of Sunset Ceremonies and it is not part of the Musical Ride. ERT has been part of the Sunset Ceremonies in Ottawa for approximately 10 years. It is to show the public an example of the RCMP’s operational response capability in its role as Canada’s national police.  The ERT demonstration is not part of Musical Ride performances anywhere other than at Sunset Ceremonies in Ottawa.” —  RCMP Sgt. Harold Pfleiderer