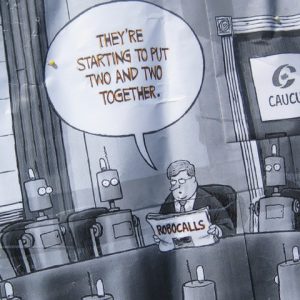 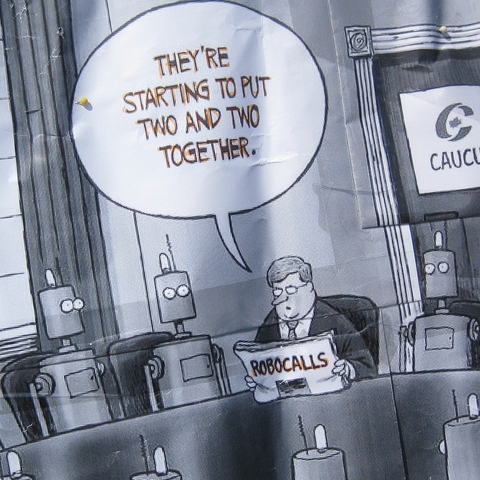 Ever since the 2011 federal election, the Conservative Party has not been able to crack the case of fraudulent robocalls. The calls were orchestrated by party operative(s) likely using the internal party database to send non-conservative voters in Guelph to the wrong polling stations on election day. On Friday, Canadians were reminded that Elections Canada’s voter suppression […]

Ever since the 2011 federal election, the Conservative Party has not been able to crack the case of fraudulent robocalls.

The calls were orchestrated by party operative(s) likely using the internal party database to send non-conservative voters in Guelph to the wrong polling stations on election day.

On Friday, Canadians were reminded that Elections Canada’s voter suppression investigation into this affair is still chugging along, stymied by a weak election law that prevents its investigators to compel testimony. (The Tories aren’t proposing to change this aspect of the law.)

That brings us to the Conservative government’s Unfair Elections Act, currently being debated in Parliament and being defended by Minister for Democratic Reform Pierre Poilievre against widespread criticism.

If you get past all the ways the Unfair Elections Act would disenfranchise people, muzzle Elections Canada, and create a giant loophole in campaign spending caps, you’ll see buried in the bill a mechanism to help the Conservative Party build its internal database of voters — and to make it hard for Elections Canada to crack down on any fraudulent calls using party databases.

How? “Bingo cards,” for one thing.

Under Canada’s current election law, bingo cards are produced by Elections Canada during advanced polling days and updated on election day. They are shared with political parties for limited use on election day to get out the vote (parties cross-reference people on the list with people they’ve identified as supporters, to pull the vote of supporters who haven’t voted yet.)

The Conservatives now want to expand the use of these bingo cards so parties can track the voting patterns of every single Canadian. That means Elections Canada would be required to send these cards to each party’s central machine to be incorporated into party databases.

Chief Electoral Officer Marc Mayrand, in his testimony before a House of Commons committee studying the bill, explained why it’s a bad idea for parties to “be able to methodically collect and document for all Canadians, after the vote, who has vote and who has not voted.

“Collecting fundamental personal information in this way about whether or not people have voted goes beyond the operational purpose related to voting on polling day. Information on who has voted should not be shared with parties further than it already is,” Mayrand’s submission stated.

Speaking of databases, you’ve probably heard of the Conservatives’ database of voters.

It’s the one that seems to have been used by the mysterious Pierre Poutine in 2011 in Guelph.

If the legislation passes, that database will get even bigger to include information about every Canadian and whether they’ve voted or not.

Coincidentally, the Unfair Elections Acts would allow the Conservative Party to reach out to past donors listed on their bolstered database during a campaign, and not include the cost as a campaign expense.

Did we mention the new robocall registry that parties will have to establish if the bill passes stipulates that they won’t be required to keep records of what numbers were called — “which is key information for investigations,” according to Elections Canada.