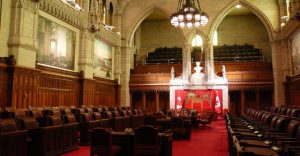 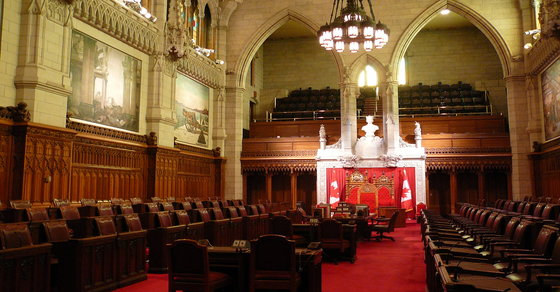 Is it time to abolish Canada’s unelected and unaccountable Senate?

The Red Chamber's latest anti-democratic move is just the latest in a long, long history.

Is it finally time to abolish Canada’s unelected chamber of not-so-sober second thought?

Thanks to the institution’s lengthy history of patronage and cronyism, many Canadians have come to associate the Senate with scandal and unethical behaviour.

In fact, the institution grew so unpopular during the Harper era that by last summer a poll found only 6% of Canadians favoured the status quo while a resounding 94% thought it should be reformed or abolished altogether. But unfortunately, when it comes to the Senate, the likes of patronage and expenses scandals are only the tip of the iceberg.

Earlier this week as Parliament rose for the summer, Conservative Senators blocked Bill C-210 – which would have added gender neutral language to Canada’s national anthem.

C-210, the dying wish of late Liberal MP Mauril Belanger, passed two readings in the House of Commons, sailing through a year ago by a whopping 219-79 margin only to be stalled by a group of lawmakers no one elected. It now faces an uncertain future.

“I don’t like this bill, and I will do what I can to ensure it doesn’t pass…I’m trying to protect the tradition rather than, you know, water it down with a politically correct version that is historically inaccurate.”

And in blocking C-210 Conservative Senators are indeed protecting a tradition: namely, the longstanding one of Canada’s unelected, unaccountable upper house blocking legislation passed by members of the democratically elected House of Commons.

Here are a few more examples from recent history:

– Bill C-4: A change of government is supposed to signal a change in public policy. As such, one of the first acts of Canada’s new Liberal government was repealing Stephen Harper’s anti-union law – passing C-4 through the House of Commons to restore things as they’d been prior to the Conservative changes. But last month, the Senate voted to keep one of the Conservative’s two anti-union laws in place, setting the stage for a battle between the elected House and the unelected Senate.

– Bill C-389: Aiming to strengthen and safeguard the rights of transgendered citizens C-389 sought to amend the Canadian Human Rights Act and Criminal Code to prohibit discrimination on the basis of gender identity and expression. Passed in the House of Commons with support from all NDP and Bloc MPs, most Liberals, and even a few Conservatives, C-389 died in the Senate in 2011 as did its successor C-279 a few years later.

– Bill C-311: In 2009, the House of Commons successfully passed C-311 (or the Climate Change Accountability Act), which aimed to bind the government to strict reductions in greenhouse gas emissions in line with Canada’s international obligations. Without any debate in the Red Chamber, the then-Conservative majority Senate killed the bill.

Of course the Senate has also been a thorn in the side of Conservative governments, initially blocking major legislation passed by the Harper government (that is, before Harper abandoned his principled opposition to Senate appointments and stacked the chamber with his own cronies).

In 1988, the Liberal-dominated Senate effectively triggered an election by blocking the Canada-US Free Trade Agreement.

Whatever your opinion of free trade, an unelected body forcing an election doesn’t fit particularly well with the ideals of parliamentary democracy.

None of this behaviour should come as a surprise. After all, elitism was more or less hardwired into the Red Chamber at its inception.

The recent shenanigans over changes to the national anthem are only the latest example of its frequent anti-democratic behaviour.

Even a representative from a one-party dictatorship once asked how the citizens of a democratic country could “put up with” unelected, unaccountable “legislators who were appointed for life“.

In the words of former Conservative Senator Hugh Segal, who supports abolishing the Senate altogether: