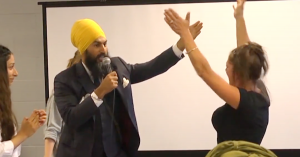 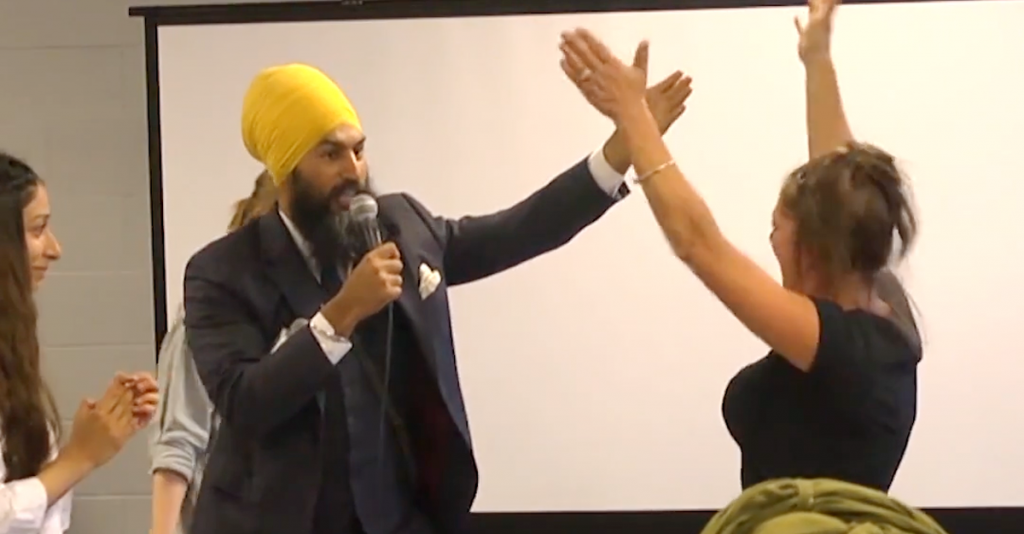 The heckler, identified as Jennifer Bush, was filmed in March at a controversial Conservative leadership event in support of Leitch that was attended by Rise Canada, a group that advocates “a permanent ban on all Muslim immigrants plus mass deportation of existing Muslims.”

At the time, the National Post reported on a video from the event, observing “Leitch can be seen shaking hands with a Rise Canada senior adviser and later responding to his questions at the gathering in Brampton, Ontario.”

Rise Canada has been involved in a number of controversial actions targeting Muslims in Greater Toronto, including demonstrations at local schools – Bush was filmed in June denouncing Muslims using megaphone and confronting teenagers on a sidewalk outside a Peel high school.

Video from the event also shows it was attended by video blogger Kevin Johnston, who was recently charged with a hate crime, and David Menzies of Rebel Media, a far-right website that receives foreign funding from anti-Muslim think tanks.

“Jennifer” is introduced to the camera as one of Leitch’s “supporters” by Rise Canada head Ron Banerjee, before expressing her excitement at the chance to finally meet the Conservative candidate who made a xenophobic, anti-immigrant purity test the centrepiece of her campaign:

“I love her. I’ve seen her a few times on video, but I’ve never met her, so I’m very excited.”

Sure enough, Bush is later spotted on the video delivering a speech railing against Muslims at the exact moment when Leitch enters the room and receives a standing ovation.

Last week, Bush made headlines around the world when she aggressively interrupted a speech by Singh in Brampton, Ontario and ranted about Muslims.

Singh responded by reassuring Bush “everyone in this room loves you, we all support you” and “we believe in your rights,” then leading the room in a chant of “love and courage” – a response that earned wide praise, including from Martin Luther King Jr.’s daughter, who said it echoed her “father’s belief that love is a powerful force in the face of hate.”

Watch @theJagmeetSingh demonstrate my father’s belief that love is a powerful force in the face of hate. #MLK pic.twitter.com/WYHsGFQ0eI

That sentiment was also echoed by each of the three other candidates running for NDP leader, all of whom expressed their “solidarity” on Twitter:

Racial attacks are unacceptable. @theJagmeetSingh handled it with dignity & respect. Solidarity with all who confront hate #ndpldr

After video of the event went viral, Bush filmed a response video claiming she’s not a racist before proceeding to launch into yet another rant about Muslims.

Jennifer Bush heckles Sikh for supporting “Sharia” then says she’s not a racist cuz “I strongly support the Hindus” https://t.co/s9WmiDQAY7

And where exactly did she shoot that video? At “Ford Fest,” naturally – the annual Etobicoke barbecue hosted by Toronto mayoral candidate Doug Ford.

One other note: Jennifer Bush recorded her “apologia” re @theJagmeetSingh at “Ford Fest”, i.e. Doug Ford who wants to be TO mayor.