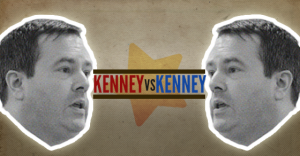 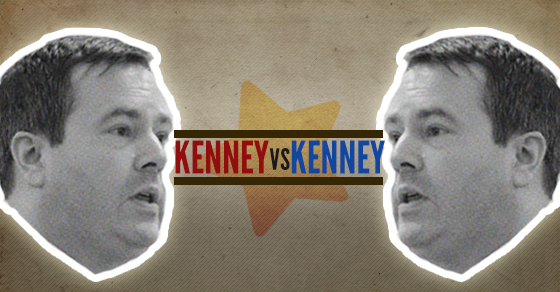 What would that ol' ragamuffin 2001 Jason Kenney have to say about his 2015 counterpart's reaction to the new Conservative recession?

What would that ol’ ragamuffin 2001 Jason Kenney have to say about his 2015 counterpart’s reaction to the new Conservative recession?

In a recent interview, Kenney concocted a brand new definition of a recession, claiming “a recession is typically defined as a widespread downturn” and what Canada is experiencing is nothing more than a “discrete sectoral downturn” (whatever that means).

Nevermind the Conservatives’ own law defines a recession as “a period of at least two consecutive quarters of negative growth in real Gross Domestic Product for Canada” (in other words, exactly what Statistics Canada shows in the first two quarters in 2015).

So why don’t we take a look how Kenney defined a recession in 2001:

“Mr. Speaker, the finance minister likes to blame everyone but himself for the recession that he sleepwalked the country into … When will he fess up to the fact that Canada is in its second quarter of negative growth, that he has led the country into a recession?”

Kenney sure seemed more certain then that he does now that two quarters of negative growth is “technically and in every other sense a recession”:

“There is no doubt in anyone’s mind that with negative growth in July and in September we will have a contraction in the economy in the third quarter. There is very little doubt in anyone’s mind that it will follow through to the fourth quarter of this year. That equals, technically and in every other sense, a recession, a Liberal recession, a recession that the Liberals have denied. It has happened.”

What might ol’ Kenney say about Conservative leader blaming Canada’s weakened economy on “the downturn in the global economy” and “forces beyond our borders?”:

“Mr. Speaker, the parliamentary secretary seems to have forgotten that the very same finance minister who eschews any responsibility for this recession was quite willing to heap upon himself responsibility for periods of modest growth in the recent past, even though that was contemporaneous with growth in other jurisdictions. One cannot suck and blow at the same time.”