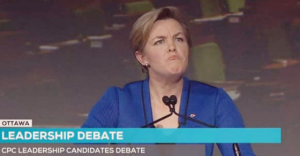 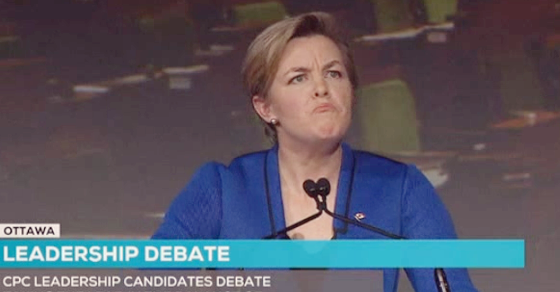 Some wondered if Leitch's snobby tone shows the self-proclaimed "anti-elite" is becoming "too elite" for her own good?

Who is an elite? Here’s how Leitch herself chooses to define that word:

“I define elite as an individual who is out of touch and seems to think they know better how someone should think.”

Nevermind that Leitch brags she’s so smart she doesn’t need to consult anyone on policy or that she reportedly yells at young staffers who forget to print “the Hon. Dr. K. Kellie Leitch, P.C., O.Ont., M.D., M.B.A., F.R.C.S. (C)” on her business cards.

But after Leitch’s ego went on full display during a Conservative leadership debate at this weekend’s Manning Centre Conference in Ottawa, it’s hard to imagine anyone in the room still buys Leitch’s phony populism.

At one point during the debate, Leitch began mocking her lowly rivals, bragging that she went to a “top of its class” university and has been published in prestigious academic journals since 2002.

Leitch even recommended everyone “please feel free” to “read anything I’ve published because I’ve been ahead of the curve.”

Putting that in layman’s terms – Leitch seems to think she knows better how everyone else should think:

The crowd later erupted in laughter after fellow Conservative leadership candidate Chris Alexander suggested Leitch thinks the issues are “too difficult for mere mortals to understand.”

In fact, throughout the debate, many conservatives were heard openly groaning, laughing and booing Leitch’s snobby tone:

The audience is groaning as Kellie Leitch brags about being published for 15 years. “How many letters,” someone shouts. #mcc2017

The audience is laughing at Kellie Leitch while Chris Alexander shakes his head. Some boos as she wraps up her answer #mcc2017 #cpcldr

Derisive giggling, to be clear.

And some wondered if Leitch’s snootiness shows the self-proclaimed “anti-elite” is becoming “too elite” for her own good?

“I’m published on this,” Leitch retorts after O’Toole asks her where her health policy ideas are. “feel free. read anything I’ve published.”

Wow Kellie Leitch talks about her tenure as a physician AND name drops the Ivey School of Business. Too elite for me.

“I’ve been published on this since…2002,” says Kellie Leitch, who is totally not an elite academic. #CPCldr

I’ve never seen a politician more enamoured with dropping her *own* name than Kellie Leitch.

That might go some way towards explaining why Leitch later placed well-behind the pack according to an informal poll of conference attendees conducted by the Manning Centre:

“Who are you voting for?” – Here are the results from today’s survey question in our app #MCC2017 pic.twitter.com/yTdpQjyv7n