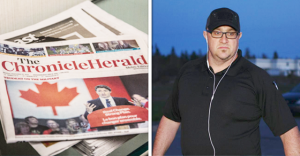 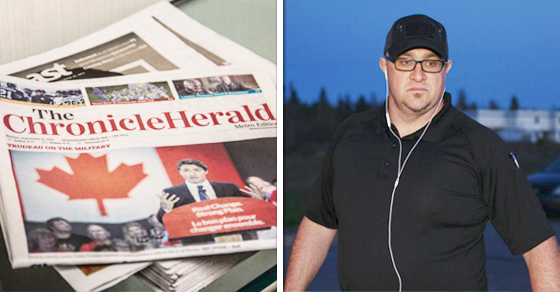 The Chronicle Herald is accused of hiring a private security firm who use "rental cars to follow" and videotape striking workers.

Sounds like management at the Halifax Chronicle Herald are opting for a heavy-handed approach.

The Chronicle Herald’s management has been paying a private firm hundreds of thousands of dollars to “spy” on journalists at the same time as the paper is demanding striking workers accept wage cuts and layoffs, says the union representing newsroom workers.

The Halifax Typographical Union recently issued a statement alleging management has hired an expensive private security firm to follow, photograph and record striking journalists who have been locked in a dispute with management since January.

Striking Chronicle Herald workers say the paper has spent about $400,000(!!) to fly in a security firm to watch them https://t.co/qbcXiJ1jUz

The union says that over the past few months, its members have repeatedly spotted Chris Van Luven using “rental cars to follow us” around Halifax.

They say he’s even been spotted photographing and videotaping picketing workers too.

Meet the security firm that monitors us and find out how much it costs #CHstrike https://t.co/yeCIoxsBmv pic.twitter.com/S46xrrBLR7

According to his LinkedIn profile, Van Luven specializes in providing “strategic and effective solutions to threats to business continuity in the workplace,” and has written blog posts on “the labour dispute business,” describing how “labour dispute services” can be “lucrative” and offer “big rewards” (but also “high risk”).

The union says that in addition to fees, management is also paying for travel and accommodation flying Van Luven and his team back-and-forth from Vancouver to Halifax.

Van Luven is also a former boxer, described as standing 6’5 and 280 lbs with “20 years of experience fighting in various martial arts – namely kick-boxing and boxing” during a 2012 heavyweight title fight in British Columbia.

More punches in the face and a solid training session with #onefc #heavyweight contender Typhoon… https://t.co/fVosvDi6Ty

HTU vice-president Frank Campbell told Canadaland that being shadowed by private investigators is leaving his members feeling “uneasy” and “kind of angry.”

But Campbell said it’s also making workers question why management is “telling us you can’t afford to negotiate a fair contract with us, but you can afford to pay these people to follow us around?”

“The Herald pays for the security guards and investigators to use rental cars to follow us on information pickets where they photograph and video our legal activities. They do the same thing at the paper’s Joseph Howe Drive offices. It is our understanding the company has provided Van Luven and his team members with private information about union members. We are left to wonder if the company has run afoul of federal and provincial privacy laws.”

The Chronicle Herald did not respond to a request for comment on this story.