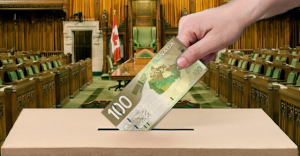 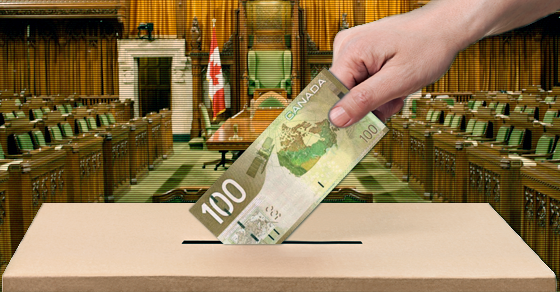 Fraser Institute: giving voters fewer choices would be good for the economy

The Fraser Institute seems to believe more "choice" is the answer to everything – except when it comes to democracy.

The Fraser Institute seems to believe more “choice” is the answer to everything – except when it comes to democracy.

According to the right-wing think tank’s new report on electoral reform, the economy is better served when “fewer parties” are involved in the democratic process.

This may come as little surprise considering they see no correlation between democracy and happiness and their experts say Hong Kong is “number one in overall freedom” in the world, but it still sounds a little fishy coming from the Fraser Institute considering their own motto suggests “choice” is the cornerstone of “a free and prosperous world”:

So what does the Fraser Institute have against giving voters more choices?

Because an electoral system based on proportional representation would lead to “the increased likelihood of electing more parties,” the Fraser Institute explains.

And although they concede “electoral rules do not necessarily affect fiscal policy directly,” they speculate anyway that this could lead to more spending on public services:

“A side effect of the incentives embedded within PR electoral systems is that they are far more likely to require coalitions to govern since it is significantly more difficult for them to secure a majority in an election … the costs of the coalition, which take the form of policies implemented in the government, are born … by the broader public.”

But a majoritarian system – like Canada’s current first-past-the-post system – is much better equipped for forcing through austerity policies, laying off public servants and gutting pensions.

The Fraser Institute highlights data they say shows a single-party, majority government is in a stronger position to take a “tough fiscal stance, particularly when politically sensitive programs, government employment and social security are involved.”

Because isn’t that what democracy is all about? Taking a tough line against your own people?

To help get their point across, the Fraser Institute also has a handy visual of two businessmen (red and blue, symbolizing a two-party system) taking a leisurely drive juxtaposed with several multi-coloured businessmen struggling for control of a car as it swerves erratically across the road: Gosh, imagine an electoral system that gave you more choices and resulted in governments spending money on issues people care about instead of one-party majorities most people didn’t even vote for taking “tough” stands against their own people?