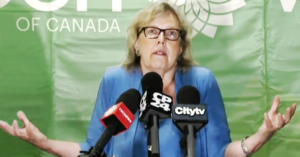 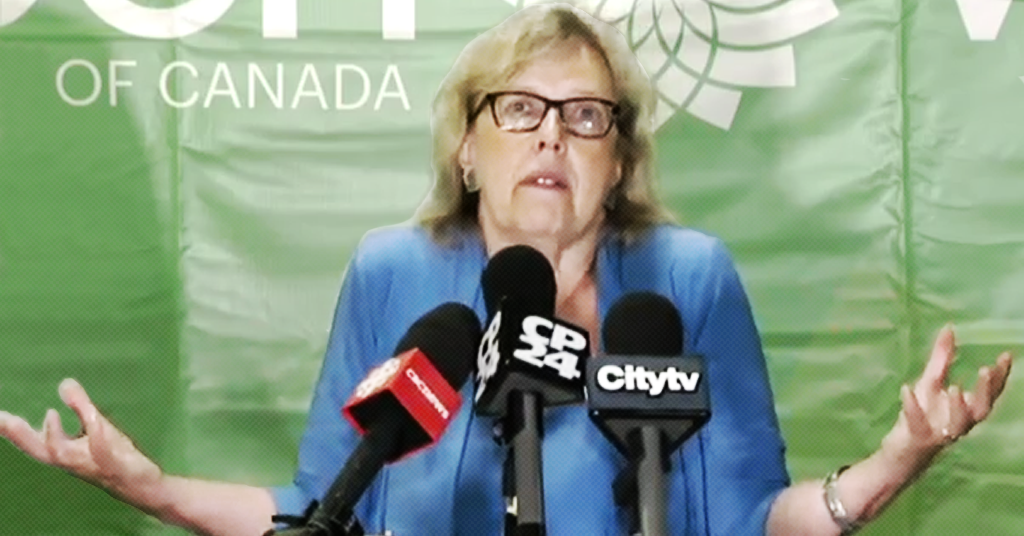 “I was asked if I wanted to resign or if I wanted the party to terminate my candidacy without my resignation, and so I resigned”

A former candidate for Elizabeth May’s Green Party doesn’t understand why he was forced to resign over his views on 9/11, considering the party continues to support at least three other candidates who promoted similar views.

Jeff Cullihall, who was the Green candidate in Edmonton West until September 16, told PressProgress that party bosses on Vancouver Island pressured him to resign after they learned the National Post was snooping around about his views on the September 11 World Trade Center terrorist attacks.

“I was asked by the Green Party to resign my candidacy,” Cullihall said, adding that he “no longer feels the need to remain totally silent” given the party’s inconsistent treatment of its candidates.

Cullihall says he never planned to run for public office until he e-mailed the party one day this summer asking who his local candidate was. After being told there was no candidate, he decided it was his civic duty to put his name forward so voters in his riding had another option on their ballots.

Although he admits it was “unlikely” he would be elected, he took a leave of absence from work and used all his banked vacation days and unpaid leave to cover the rest. 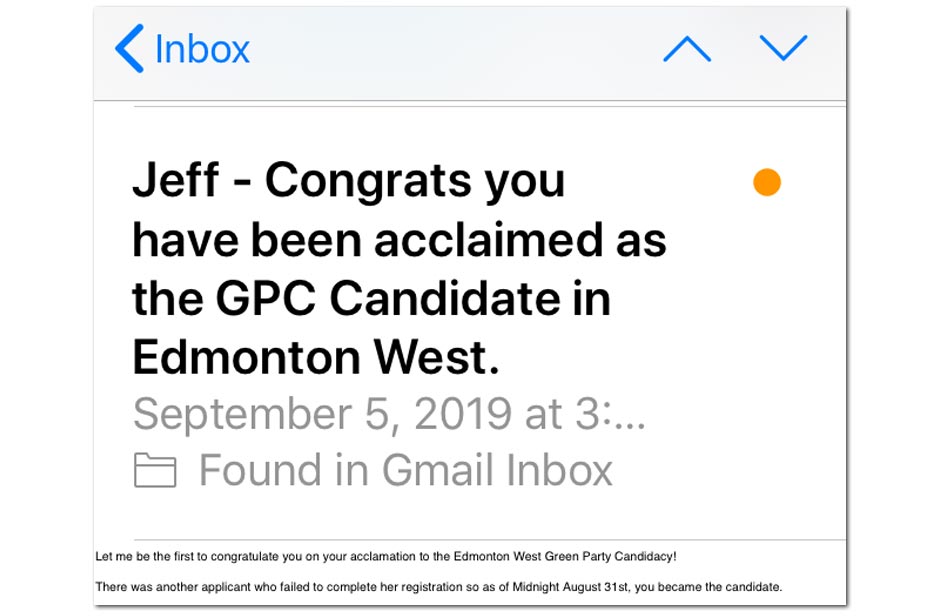 September 5, 2019 e-mail from Green Party of Canada to Jeff Cullihall

His run for public office ended 11 days after his acclamation as his riding’s candidate. That was the day the National Post sent him questions about a Facebook post about the conspiracy film “Zeitgeist” on the 15th anniversary of 9/11.

Later that day, he got a long-distance call from Vancouver Island, while he was at a grocery store, and was “immediately asked to resign.”

“I was asked if I wanted to resign or if I wanted the party to terminate my candidacy without my resignation, and so I resigned,” he said.

“I was asked to resign by the third or fourth sentence,” he recalled. “The guy on the phone was annoyed that I even wanted to talk about it.”

He says a party official told him they “would prefer the Post not run the story.”

Another ex-candidate, Kevin Nichols — who withdrew the same day — suggested something is “broken” if backroom officials are asking Green Party candidates to resign just to avoid awkward headlines about 9/11 conspiracy theories.

He cited health reasons for his decision to step down, although screenshots of a video he shared on Facebook claiming a cruise missile struck the Pentagon on 9/11 circulated on Twitter earlier that day. Nichols confirmed he was contacted by the Winnipeg Free Press about his views on 9/11 shortly after.

“Do I admit to reading conspiracy theories? Yes,” he said. “Do I promote them as my own? No. Do I force them on others stating they must believe what I believe? Absolutely not.”

He agrees the Green Party should screen candidates for violent or hateful views, but he adds: “If people are pressured to step down for having an opinion contrary to others and not violating any Green policy or being illegal, immoral or unethical, then the internal system is broken.”

“This would mean the Greens bow to pressure from external sources instead of standing behind candidates.”

“Why would posting a 9/11 video disqualify a candidate when the leader of another party was found in breach of ethics, or the other not disclosing he is also a US citizen?” Nichols asked.

Cullihall said he was also surprised to learn there are a number of Green candidates with the same “issue” who “apparently have not been asked to resign.” 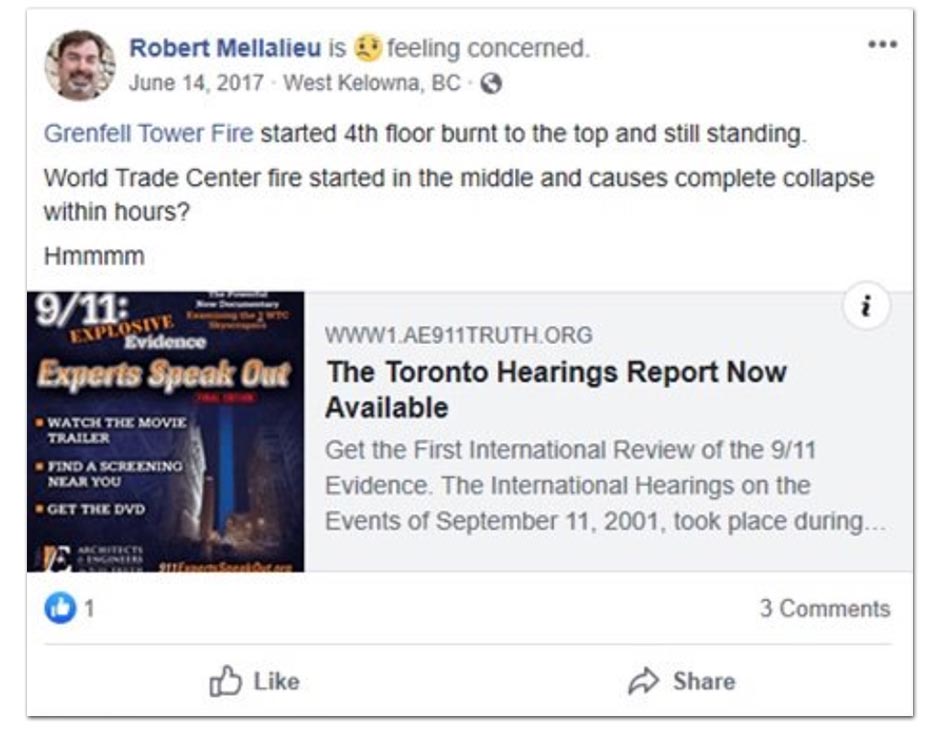 Mellalieu assured PressProgress he no longer believes in “9/11 conspiracy theories.”

Mellalieu said he was initially drawn to 9/11 conspiracy theories because he is an “analytical person,” but is usually “careful to look at all aspects of an issue.” He said he’s “sorry” if his 9/11 post “distracted from the urgent crisis of climate change.”

On the other hand, Green candidate Greg De Luca (Brossard-Saint-Laurent) says he shared an article that claims 9/11 was a “false flag” orchestrated by the “deep state” simply because he thought it was “fun.”

“I shared it for fun with no comment,” he explained. De Luca stressed that “the aforementioned article is also clickbait.” 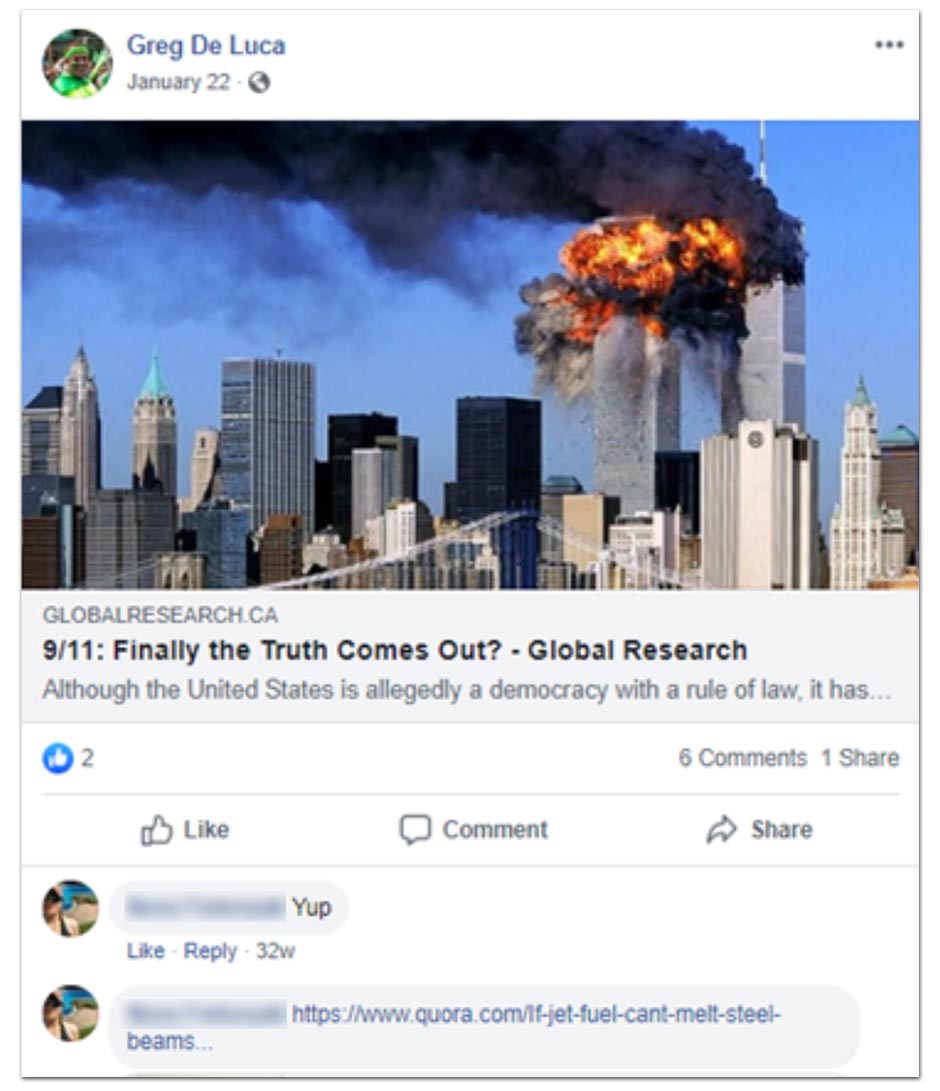 The article appears on a fringe website known for promoting conspiracies on topics like vaccines, chemtrails and climate change denial that was previously red flagged by top NATO researchers for amplifying and spreading Kremlin disinformation.

Yet De Luca told PressProgress he regards himself as a “critical thinker,” noting that a golden rule for him is to “believe nothing until it has support” — including 9/11.

“I take no stand on the issue other than stating that most of the authentic information on the 9/11 attacks are still classified,” the Green candidate said. “Until this information is made public, no one knows what really happened that day.”

Dyck did not respond to requests for comment from PressProgress, but last month Green Party officials told the Guelph Mercury he is “not a 9/11 truther” and claimed the “one-time post” was “made purely out of intellectual curiosity.” 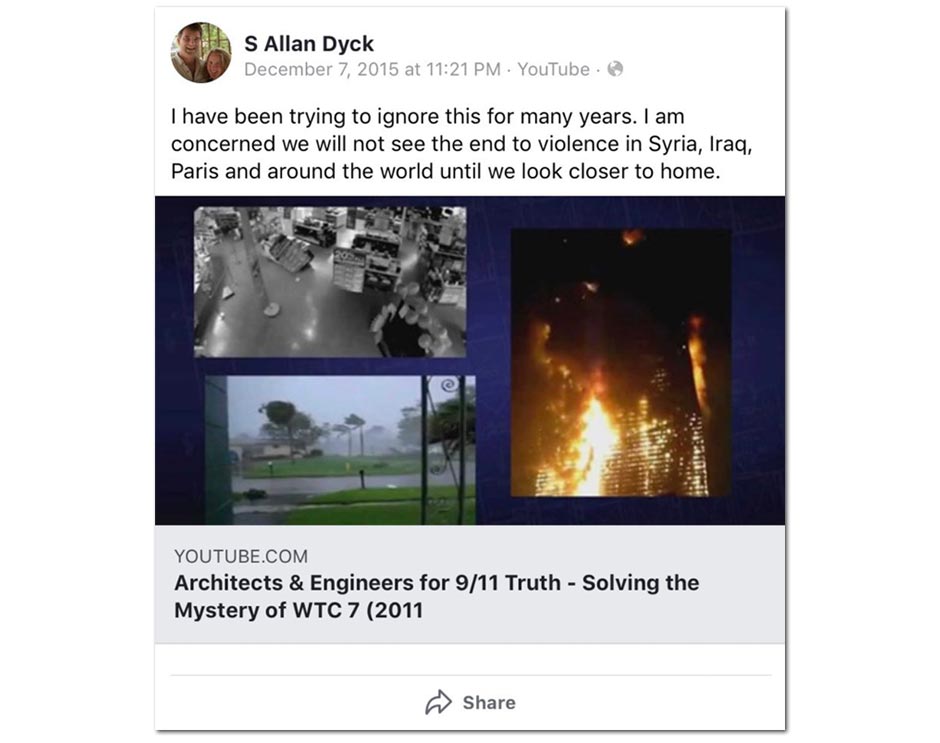 Both Paul Manly and Elizabeth May, the Green Party’s two incumbent candidates, have themselves attracted awkward headlines relating to 9/11 trutherism.

Manly faced questions this year about his participation in a 9/11 truther film festival back in 2011, something he would later admit made him “uncomfortable.”

“There are a lot of conspiracy theories when it comes to 9/11 and I do not subscribe to them,” Manly told Global News.

May herself raised eyebrows when she tabled a petition calling for a parliamentary review of the “omissions and inconsistencies” in the 9/11 Commission’s official report, including the possibility 9/11 was an inside job.

May said she didn’t agree with the petition, but saw it as the “obligation of an MP to present every petition submitted to them,” even though House of Commons rules state MPs are “not bound to present petitions and cannot be compelled to do so.”

Cullihall says his experience as a Green Party candidate hasn’t left him disillusioned and he doesn’t feel like it was a waste of time, explaining that he learned a lot about the political process this year.

He says he still thinks Elizabeth May and the Green Party are the “best choice” for Canadians, and he still wouldn’t walk back any of his statements on 9/11 even if the Green Party had given him an opportunity to explain himself.

“I don’t think anyone should step down or be dropped for believing the obvious truth that we don’t know all the facts on 9/11,” he said.