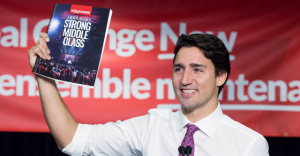 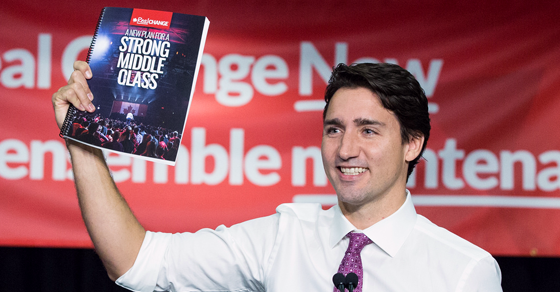 Focus Group to Finance Canada: Trudeau’s Government is Not Doing Enough For The Middle Class

Many Canadians perceive a disconnect between the federal government's middle class rhetoric and its policies.

It turns out words and actions may not be the same thing.

Despite the Trudeau government’s sunny rhetoric about helping the middle class, its very own public opinion research suggests Canadians are having trouble seeing any results.

#LPC’s priority: strengthening those at the heart of our economy— middle class Canadians – who haven’t had a decent raise in 30 years.

According to newly released public opinion research on Canada’s economy prepared for Finance Canada, bureaucrats concluded there is a “widespread perception” the Trudeau’s government “could do more for the middle class.”

“At least some participants in each group felt that the Government of Canada could be doing more to assist the middle class,” reads the report published internally in February 2017 based on focus groups held across the country.

Focus groups also said they’d like the Trudeau government to do more to help those struggling to join the middle class:

“Some participants felt that the Government of Canada should focus as much (or more) on the ‘lower’ class and try to pull more members of this class up into the ‘middle class’. Specific measures that were identified to help achieve this include establishing a minimum guaranteed income and improving job-training programs (in partnership with the provinces).”

Based on the feedback Finance Canada received, one of the top ideas is having high earners and corporate “pay their ‘fair share’ of taxes:

• “Cracking down on tax havens.”

Here are a few other ideas the focus groups had about how Trudeau’s government can make life more affordable and reduce inequality:

• “Increasing the availability of subsidized/affordable housing”;

Given the current state of things, maybe these answers should come as no surprise.

And it gets worse:

In other words: Canada’s middle class is shrinking, people are feeling the squeeze, and many feel the government isn’t doing enough to reverse the trend.

That reflects what Finance Canada was told too.

Asked to describe their feelings about how the economy is affecting them, respondents were most likely to choose words like “uncertainty,” “insecurity” and “precarious.”