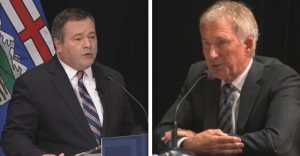 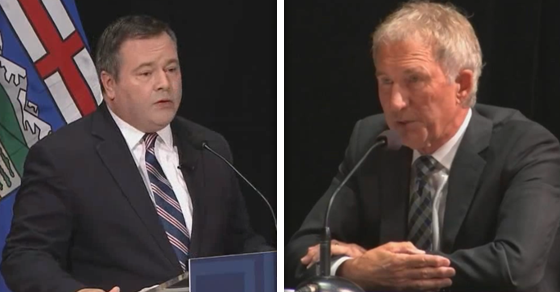 First Question at Alberta UCP Debate: Do Conservatives Need to Declare They’re ‘Not Racist’ or ‘Homophobic’?

"Some people advocate that conservatives declare what they are – such as not racist, not homophobic, not sexist..."

Alberta’s United Conservative Party decided to start things off with a bang at the first leadership debate of the new party’s existence Wednesday night.

After getting off to a rocky start sharing “sexist memes,” distancing themselves from their alt-right allies at Rebel Media and selecting an interim leader who worked for an organization that opposes the “homosexual agenda,” it seems Alberta’s new conservative party is still struggling to come to terms with a few of the realities of modern life in the year 2017.

Debate moderator Dave Rutherford, a former radio host who leads a unite-the-right political action committee that tried to bring Trump White House advisor Kellyanne Conway to Alberta for a fundraising dinner, led things off addressing the big elephant in the room: “conservatives themselves.”

“In today’s hyper-charged, often angry political climate, we’re hearing lots of discussion about the treatment of gay, lesbian and transsexual Albertans,” Rutherford said, “as well as often acrimonious debate about race – a topic that wasn’t on the lips of most Albertans in the recent past.”

“Some people advocate that conservatives declare what they are – such as not racist, not homophobic, not sexist,” he continued, before asking: “is there a need to identify what you are instead of what you are not?”

Rutherford frequently returned to his theory that “social media” could be to the real culprit, suggesting at one point “social media” is causing “Millennials” to care about “social issues”:

“Young people, let’s call them ‘millennials’ for now, seem to be engaged but they may base their political decisions on much different criteria than others did in the past and they use the Internet almost exclusively for their information. Are debt and deficit on their minds? Are social issues more important? Do they make decisions on likes or dislikes –on appearance over substance?”

How did UCP leadership candidates choose to respond to a question about addressing perceptions their party is bad on “social issues” and needs to declare they are not racist, sexist and homophobic?

Did not directly answer the question, expressed his belief in “tradition” and “ordinary people” instead:

“I believe that conservatism is a confidence in ordinary people, it’s a belief in the common sense of ordinary women and men, it’s a belief in a tradition of ordered liberty, a respect for the wisdom of those that have gone before us and built our institutions and customs…”

Directly answered the question, acknowledged the United Conservative Party is viewed as “homophobic” and took a swipe at Kenney’s position on Gay-Straight Alliances that would amount to “outing kids”:

“This actually comes up in almost every roundtable session that I’ve held across this province … Just yesterday I was up in Innisfail, this couple in their fifties, they have four grown daughters in their twenties. And they said to me … ‘I can’t convince my daughters to vote for this new party … they came to me and they said homophobic, just like you said, Dave’.”

Did not directly answer the question, said he wants to be premier for “all Albertans,” but immediately listed “investors” as his first example:

“Well, the first thing is, I don’t think we have anything to apologize for as conservatives. And I think when we start playing the games and using the language of the left and the NDP, we end up falling into the traps of the NDP and that will cause us to risk losing the next election.”

In other news, former Progressive Conservative turned United Conservative MLA Rick Fraser announced Thursday morning he is leaving the UCP, singling out “social issues” among others in his resignation letter, stating: “we as leaders should be defending those who can’t defend themselves – full stop!”

Alberta’s United Conservatives will select a new leader on October 28.