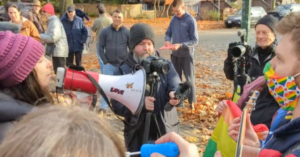 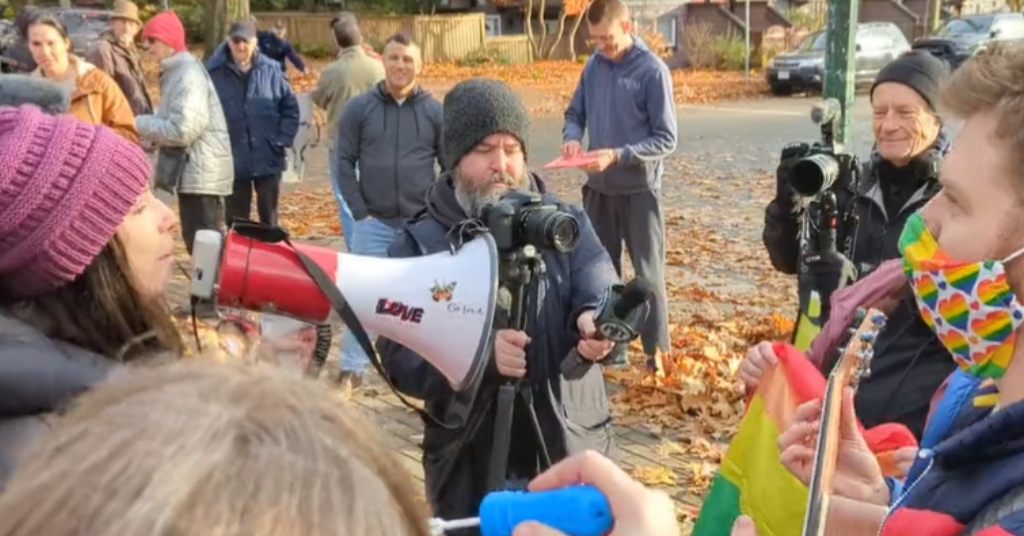 A group that mobilizes parents against 2SLGBTQ+ resources in schools organized a protest at a Storytelling with Drag Queens event in BC last week. Far-right protesters yelled slurs and insults at 2SLGBTQ+ event attendees and supporters.

The SOGI International Taskforce is a project of the Canadian Freedom Coalition, a convoy affiliated group that operates in the Tri Cities and the Fraser Valley in BC. The Taskforce organized a protest on Friday at the Kitsilano Neighborhood House, drawing a number of other far-right groups.

According to their website, the Taskforce aims to “expose the truth about the Sexual Orientation and Gender Identity agenda being pushed in school curriculums around the world, and empower parents to take back control over their children’s education.”

The protest against the drag queen story time event was amplified by Action4Canada, a Christian nationalist group that has also been organizing against  2SLGBTQ+ resources in schools across the country.

Action4Canada also attempted to serve a “notice of liability” to Teddy Chan, the executive director of Kits House prior to the event, claiming that hosting a drag queen event with children is illegal.

At the event, a group of 2SLGBTQ+ supporters formed a human shield to protect the drag queens, and the families and children who attended from the far right protesters, allowing the event to proceed.

Yesterday at Kitsilano Neighbourhood House, anti-LGBTQ2S+ protesters organized within the Convoy movement. They screamed “P*DOPHILE” and “GROOMER” at parents bringing their children to a community event. They engaged passersby in far-right rage baiting. This is unacceptable. pic.twitter.com/ZCE6StAuZR

According to the Canadian Anti-Hate Network, “accusations of “child grooming” were historically used to keep members of the 2SLGBTQ+ community out of professions like teaching. These accusations, however, never abated within the far-right, which has long cast their ideological and political enemies as pedophiles.”

One notable far-right personality who attended included Odessa Orlewicz, a far-right podcaster who promoted the protest through Telegram.

“This Odessa person got on the megaphone and started screaming through the megaphone at us, calling us pedophiles, and asking if we have sex with children,” McCartney told PressProgress.

“It was very clear that she was sort of putting on some sort of show for the right-wing cameras that were there.”

Other far-right personalities who protested the drag queen story time event included Dan Dicks, a man who was arrested at a Black Lives Matter protest in Vancouver in 2020, along with “Billboard Chris,” a man who says he travels across North America to “oppose gender ideology.”

“For us it was traumatizing to have people call you the worst names imaginable— names that have been thrown at LGBTQ people for decades, about lies that we are predatory or dangerous and shouldn’t be allowed around children. It’s awful,” McCartney said.

Here are some of the signs at the event. It’s a mishmash of bigotries and conspiracies that are promoted within the #Convoy movement by Christian nationalists and related extremists who view COVID as an opportunity to radicalize. pic.twitter.com/146wrLA8UD

Communities Over Convoys Vancouver is a Twitter account that tracks convoy affiliated groups in BC. COC Vancouver member Stephanie believes this event shows that far-right activity online has real world consequences that can’t be ignored.

Stephanie says she fears that it is only a “matter of time” before things escalate in BC.

In June, another drag event faced violent threats in Victoria, BC, and in July, protesters waved rainbow swastikas at a drag queen story time event in Richmond, BC.

The latest protest in Kitsilano is just one of many that have taken place across the country, throughout the least year, demonstrating a rise in threats and harassment towards the 2SLGBTQ+ community. In the US, the Gay and Lesbian Alliance Against Defamation recently published a report showing 124 instances of anti-drag attacks in 2022.

“Neighbourhood houses have a long history of working alongside our 2SLGBTQ+ communities in hosting drag storytimes. They are a celebration of our commitment to create welcoming and inclusive spaces for all, and we will continue to host these events.  We know that even though these voices of hate are loud, there is so much more love and support for our 2SLGBTQ+ neighbours.”