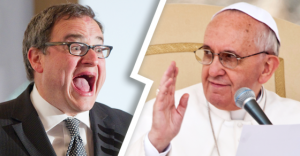 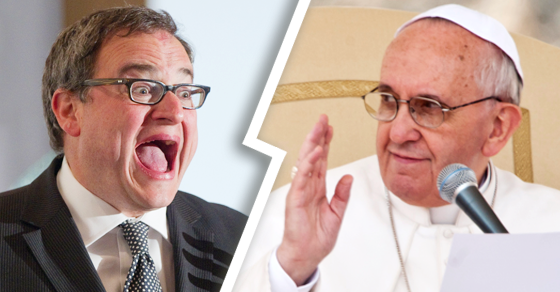 Is the Pope Catholic? According to Ezra Levant: no.

Is the Pope Catholic?

According to Ezra Levant: no.

Reacting to Pope Francis’ encyclical call for action on climate change, the former oil lobbyist and Sun TV host accused the head of the Roman Catholic Church of “replacing Catholic theology with the superstitious cult of green extremism” and insinuated he was inspired by a “mass-murdering Marxist” in a video posted to the Rebel Media YouTube channel Sunday.

Levant goes on to insinuate the Pope’s call for a “cultural revolution” is inspired by “mass-murdering Marxist” dictator Mao Zedong’s own cultural revolution in the 1960s, in which the former Chairman of Communist China “razed everything” and “arrested or killed any intellectual who had a wrong thought.”

“Surely that phrase couldn’t have been chosen by accident,” Levant says. “I don’t think it’s a coincidence.”

In fact, Levant is correct: it isn’t a coincidence because the Pope did not quote Mao Zedong.

The quote Levant points to appears to have more to do with “science and technology” and the relationship between “human beings and material objects” than it has to do with a genocidal purge of those holding “wrong thought.”

Levant goes on to suggest the leader of the Catholic Church is:

For those keeping track at home, the Pope joins Preston Manning and Tim Hortons on the growing list of people and companies who’ve been targeted by an Ezra Levant smear campaign in the last year.