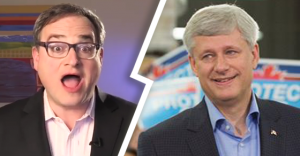 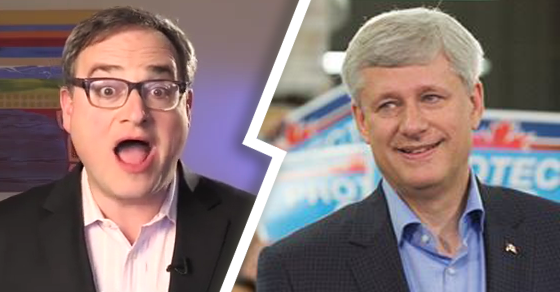 Conservative pundit Ezra Levant's fear-mongering against Muslim-Canadians has hit the next level. He now blames Stephen Harper's Conservatives for deliberate acts of social engineering, believe it or not.

Conservative pundit Ezra Levant’s fear-mongering against Muslim-Canadians has gone to the next level.

He now blames Stephen Harper’s Conservatives for deliberate acts of social engineering, believe it or not.

On a recent episode of his YouTube show, Levant crunched some numbers and arrived at a startling conclusion: the Conservatives “deliberately” increased Muslim immigration “since 9/11” as “a deliberate act of social and political engineering”:

“In that 10 year period, Canada deliberately doubled our Muslim population. This wasn’t natural birth rates, this was a deliberate act of social and political engineering, a decision made in Ottawa, made by the Liberal government in 2005, but for the years after that, made by the Conservative government to deliberately change the demographic nature of Canada.”

Good grief – 9/11? Deliberate acts of social engineering? The Conservative government? Is he saying these three things are connected?

Levant doesn’t say, but maybe he should bring Jason Kenney on his show to explain?

Kenney was Canada’s Citizenship and Immigration Minister during several of the years Levant cites in his analysis. Is Levant suggesting Kenney orchestrated “a deliberate act of social and political engineering” after “9/11”? By his own admission, Levant simply tallied up the number of immigrants from countries with large Muslim populations he found on the Citizenship and Immigration Canada website even though this tells us nothing about what religion those individuals may or may not subscribe to. He just assumes everyone is the same religion.

Elsewhere on CIC’s website, data on Canadians of Syrian and Iraqi origin show more than half had non-Muslim backgrounds according to the latest census data, so his numbers are demonstrably over-stated in at least this way.

Even taking his inaccurate numbers at face value, they don’t quite paint the xenophobic picture Levant wants to portray – of the 30 different countries he lumps together, Canadians of Pakistani origin (the top country of origin on Levant’s list) represented an underwhelming 4.3% of total immigration since 2005.

To put that number into context, Canadians of Indian origin represented 13.7% of total immigration over the same period. That was followed by Canadians of Chinese (13.5%) and Filipino (12.4%) origins.

So, in addition to openly advocating racist immigration policies, fuelling prejudice against religious minorities and accusing the Conservative Party of Canada of deliberate acts of social engineering, Levant’s numbers are just flat out misleading.