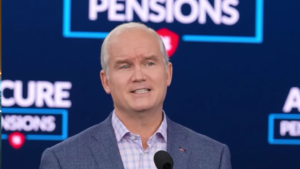 Conservative leader Erin O’Toole claims his platform will “secure pensions” for Canadian workers, but labour groups say the platform is light on details and contradicted by O’Toole’s past efforts to allow employers to cut pensions.

Last month, O’Toole’s Conservatives announced they will “change the law so that when a company goes bankrupt or is being restructured, workers come first — not corporate elites.”

But the Canadian Labour Congress says O’Toole is speaking “out of both sides of his mouth on pensions.” The CLC warns the Conservative platform actually proposes changes to bankruptcy rules that may make pension funds at bankrupt companies less reliable.

The Conservatives say they will change bankruptcy law to stop pension plans deemed “underfunded” from being automatically exchanged for annuities — financial contracts to pay out “fixed payments to pensioners” later to “reduce risk.”

According to the Conservatives: “Companies typically fail in the midst of a recession when markets are depressed, and as a result, this practice currently locks in losses and means workers receive less money.”

Chris Roberts, Social Policy Director with the Canadian Labour Congress, said that although “annuities will definitely provide a secure, predictable benefit,” O’Toole’s plan could result in retirees receiving significantly lower pension payouts if a company went under during a recession.

“In saying ‘fixed payments’, (O’Toole) is making something good sound like something bad,” Archer told PressProgress.

For example, Archer pointed to defined benefits,where employers are required to ensure pensioners get monthly payment regardless of their company’s investment returns, noting they “are also fixed payments.”

“Defined benefits are the same as annuities and they are extremely valuable to retirees,” Archer said. “They are the most preferred method of receiving retirement income.

More worryingly, other experts note the stated rationale behind the proposal echoes a bill O’Toole previously tabled that would have empowered employers, in the case of bankruptcy, to undercut existing pension obligations.

“The remaining pledges sound to me like a promise to re-introduce Bill C-405,” University of Toronto Law Professor Doug Sarro told PressProgress.

The bill, according to its summary, would “authorize the administrator of an underfunded pension plan, in certain situations, to amend the plan or to transfer or permit the transfer of any part of the assets or liabilities of the pension plan to another pension plan.”

That means if a company went bankrupt and it didn’t have the funds to cover its workers’ pensions, the bill would give administrators a freer hand to modify the plan.

According to O’Toole, at the time:

“The key thrust of Bill C-405 is we should modernize legislation to make sure that pensions, as much as possible, can be kept as a going concern, so that they can still be growing, so that they can have the benefit of the pooling of resources and large numbers of people within the plan. That is the aggregating benefit. That is the first principle of this bill that would be changed, the ability for pension administrators to preserve and enhance that fund.”

Sarro explained that O’Toole’s bill would have effectively allowed employers to walk away from their promise to provide workers a pension.

“Bill C-405 proposed that if an employer with an underfunded pension plan enters insolvency, it can try and get pensioners to help bail it out. The employer can reduce its obligations to the underfunded plan or satisfy those obligations using assets from another pension plan,” Sarro said.

“The thinking behind this proposal is that giving employers this flexibility will make it easier for them to attract the investment they need to restructure and get back on their feet,”

But in the case of bankruptcy, the likelihood of a plan becoming more generous is slim.

“This amendment could be used to reduce benefits or convert a secure defined benefit to another kind of risker benefit for the retiree or employee,” Archer said. “That is the same as just walking away from the promise you made to employees during their working lives.

The CLC has criticized O’Toole’s Bill C-405, noting it would make it easier for employers to “walk away” from their pension obligations. “Perversely, Bill C-405 proposed to avoid insolvency-induced benefit reductions by giving sponsors the ability to reduce benefits in other ways,” Roberts added.

In the course of the debate, O’Toole explicitly ruled out any changes to give underfunded pensions “super priority” ranking over the interests of creditors:

“Super-priority will actually lead more companies to liquidate and not restructure.”

That bill would have allowed federally-regulated employers to unilaterally back out of their DB pension obligations in favour of “target pensions” without binding obligations.

According to Roberts, O’Toole’s plan “would have changed federal pension standards legislation to achieve what Bill C-27 tried to accomplish.”

O’Toole told the House of Commons “the goal for anyone, in politics and in advocacy outside of here, should always be to maintain these businesses as a going concern.”

As an example, he cited his own experience as a young corporate lawyer involved in the restructuring of Air Canada, after the airline filed for bankruptcy in 2003.
“Thousands of jobs and an important service for our country were preserved because the insolvency procedure worked and the pension plan that was at risk is healthy now,” O’Toole said.

Except, Air Canada responded to its bankruptcy by trying to cut its pensions and, through to 2011, demanding new hires accept lesser plans. In 2015, the Toronto Star noted of the company’s return to financial health and its pension health: “The swing from red to black ink comes, in part, because of concessions made by employees, and new hires don’t have the same pension plans as other employees.”

The Conservative Party did not respond to requests for comment.