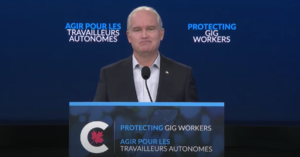 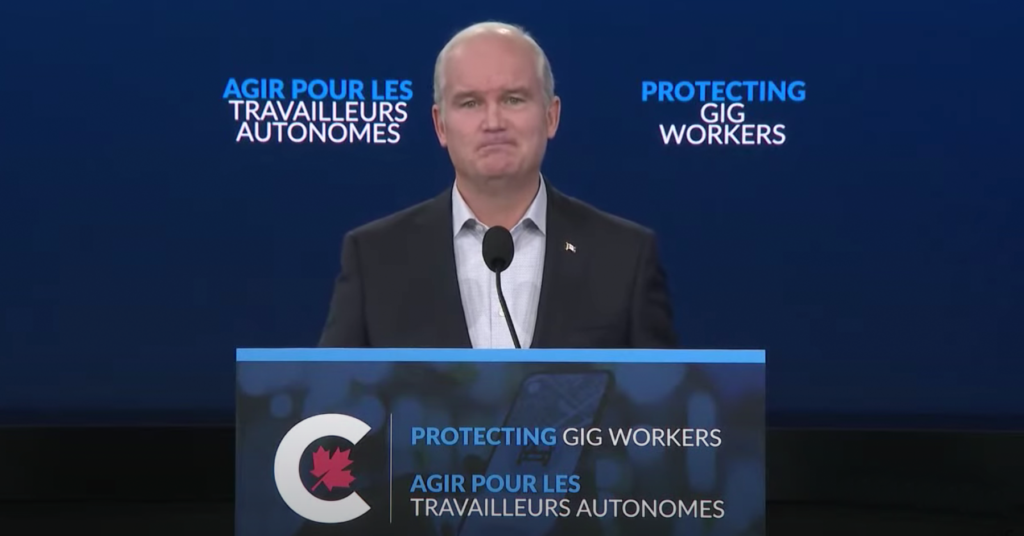 O’Toole’s platform promises that a Conservative government would require app-based companies like Uber, Lyft and Skip the Dishes to make contributions to an Employee Savings Account every time they pay workers. Workers would be able to withdraw from these funds “as needed.”

Last week, California’s top court ruled those changes were unconstitutional under US law.

Earlier this year, O’Toole brought Dan Mader on board as his director of policy — Mader was a corporate lobbyist for Uber and played a lead role developing the Conservative Party’s 2021 platform. 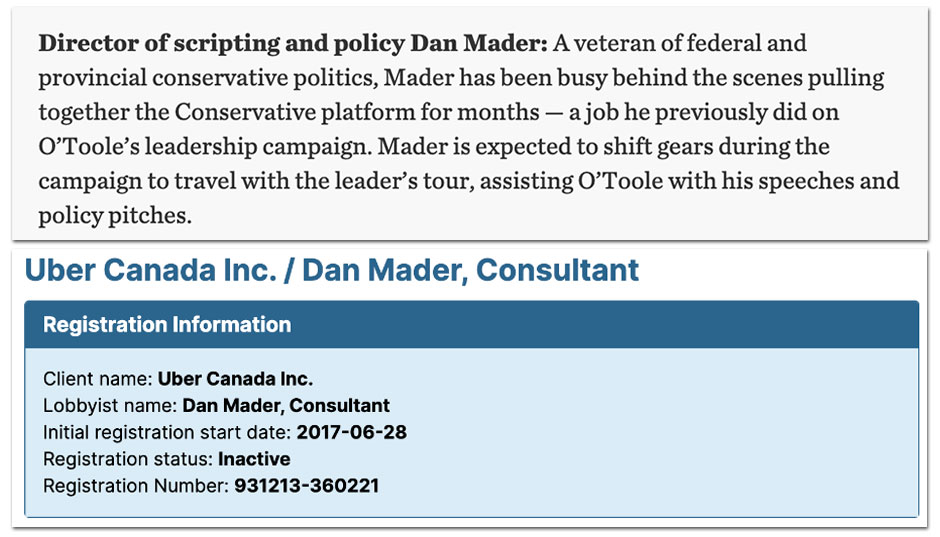 Toronto Star, Office of the Commissioner of Lobbying of Canada

Scott, who also works as a courier for multiple app-based employers, says O’Toole’s proposal will not help workers but instead set a “frightening precedent.”

“It is cynical, disgusting, and offensive to see O’Toole speaking for big business instead of working class people,” Scott said. “In Canada, the working class is struggling – most of us are exhausted, angry, and fed up.”

Scott said O’Toole is “taking lessons from Uber” to present a misleading plan for Canadian workers.

“Portable benefits is the carrot Uber and other apps dangle in front of gig workers in exchange for permanently misclassifying us,” Scott added, noting gig workers have presented their own demands, which have been ignored by O’Toole. “Gig Workers don’t want to be used as props in a corporate and political game of hiding regressive policy actions behind seemingly progressive words.”

Joshua Mandryk, a labour lawyer with Goldblatt Partners, agrees that the Conservative’s policy proposal is “strikingly similar to the proposals for which Uber has been lobbying.”

“The Conservative proposal correctly acknowledges the problem with the status quo, but proposes the entirely wrong solution by carving gig workers out of our public EI and CPP systems and locking them into a second-tier scheme,” Mandryk told PressProgress.

“While framed as a measure to support gig workers, this proposal must be understood as a carve-out that would deny misclassified gig workers the basic workplace rights they deserve,” Mandryk explained.

“The only fair future for gig workers starts with employment status and a strong floor of workplace rights.”

Mandryk says a better method to protect gig workers would be to enshrine the “ABC test” in labour law, which would make it more difficult for employers to misclassify workers as independent contractors instead of employees.

Bea Bruske, President of the Canadian Labour Congress, calls O’Toole’s strategy “cynical” and said “Erin O’Toole’s gig economy policies read like they were run off of an Uber mimeograph machine.”

“For too long, Uber has dictated the terms of workers’ employment and offloaded operating costs on drivers,” Bruske told PressProgress. “They haven’t been held accountable for providing basic employment standards, like a minimum wage and vacation pay. Misclassifying these workers as independent contractors means these workers are excluded from unemployment benefits and even basic labour standards protection.”

“Nothing O’Toole is proposing will change any of this,” Bruske said.

“Instead of backing precarious workers, O’Toole is standing with the giant app companies.”