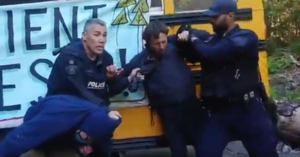 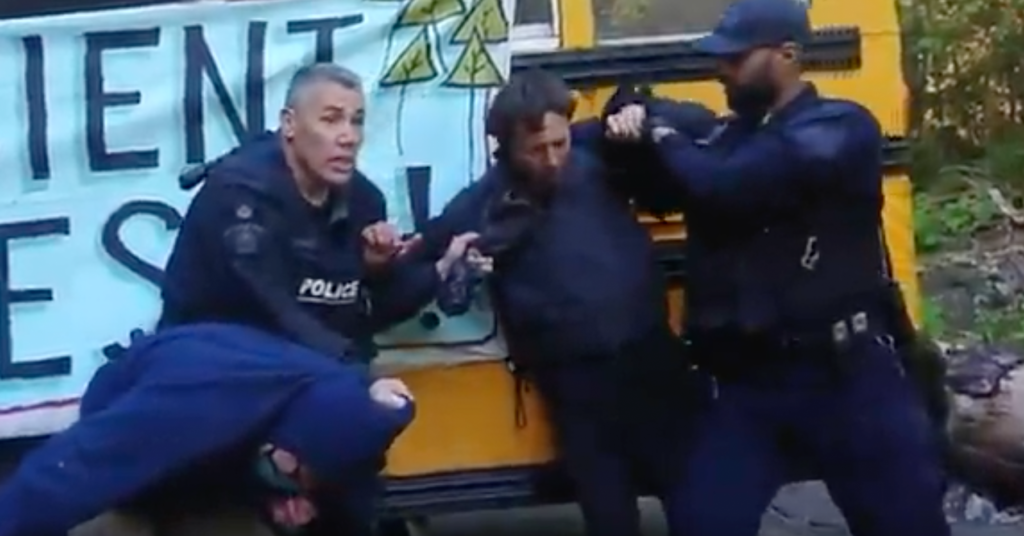 Instagram deleted then quietly restored an account belonging to environmentalists taking action against old-growth logging on Vancouver Island after the group posted a video of a violent RCMP arrest of an Indigenous legal observer.

The RCMP has faced heavy criticism over its handling of anti-logging protests at Fairy Creek in recent weeks. On Wednesday, a coalition led by the Canadian Association of Journalists filed an application with the BC Supreme Court to order the RCMP to stop blocking journalists from accessing the protest site.

Efforts to relay what’s happening on the ground are facing obstacles online too.

The Rainforest Flying Squad, which describes itself as a non-violent group focused on protecting ancient rainforest on Vancouver Island, told PressProgress one of its social media accounts vanished last Friday shortly after they posted a video of RCMP officers violently arresting environmentalists.

The @fairycreekblockade Instagram account is dedicated to sharing information about the blockade set-up on Pacheedaht Territory against old-growth logging near Port Renfrew by the Teal-Jones Group.

The group’s video shows an RCMP officer aggressively grab the hoodie of an Indigenous legal observer from behind and force her head downward. The woman can be heard telling the officer she “cannot breathe.” 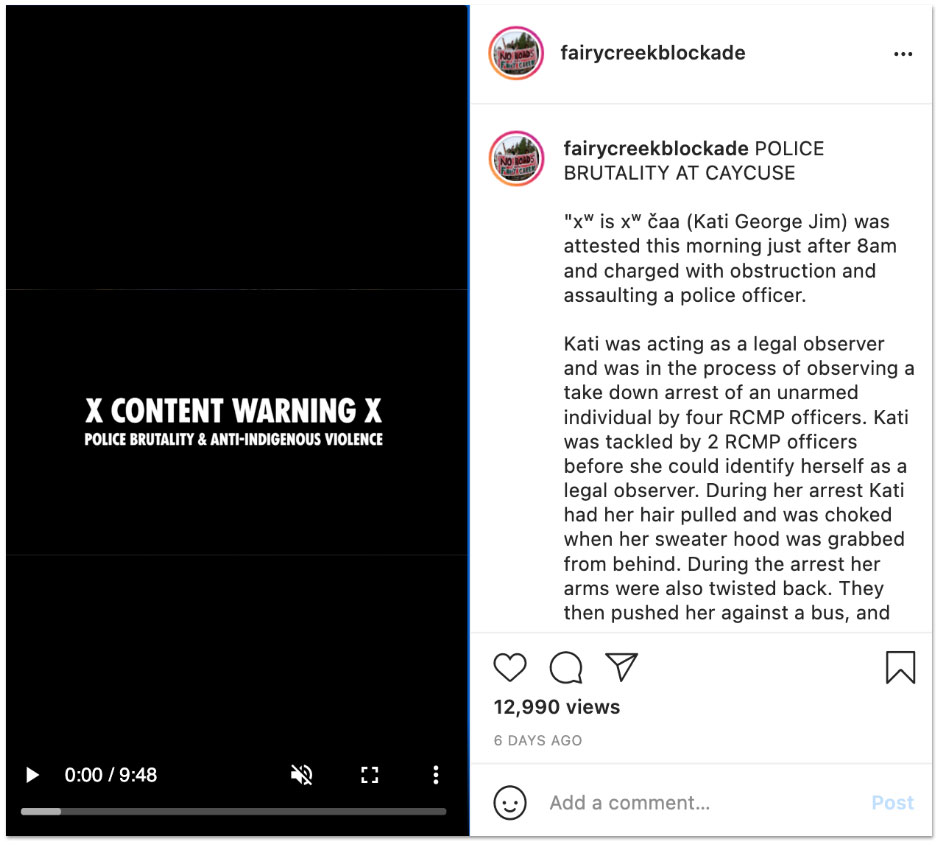 The video caption names the individual as “xʷ is xʷ čaa (Kati George Jim), who was acting as a legal observer at the blockade. It notes she was later charged with obstruction and assaulting a police officer.

The caption explains: “Kati was tackled by two RCMP officers before she could identify herself as a legal observer. During her arrest Kati had her hair pulled and was choked when her sweater hood was grabbed from behind. During the arrest her arms were also twisted back. They then pushed her against a bus and pulled to the ground.”

“This is yet another instance of anti-indigenous violence, police brutality and the RCMP’s extrajudicial enforcement of this injunction.”

The Rainforest Flying Squad shared screenshots with PressProgress showing a notification from Instagram that states: “Your account has been disabled for not following our terms. You won’t be able to see it.” 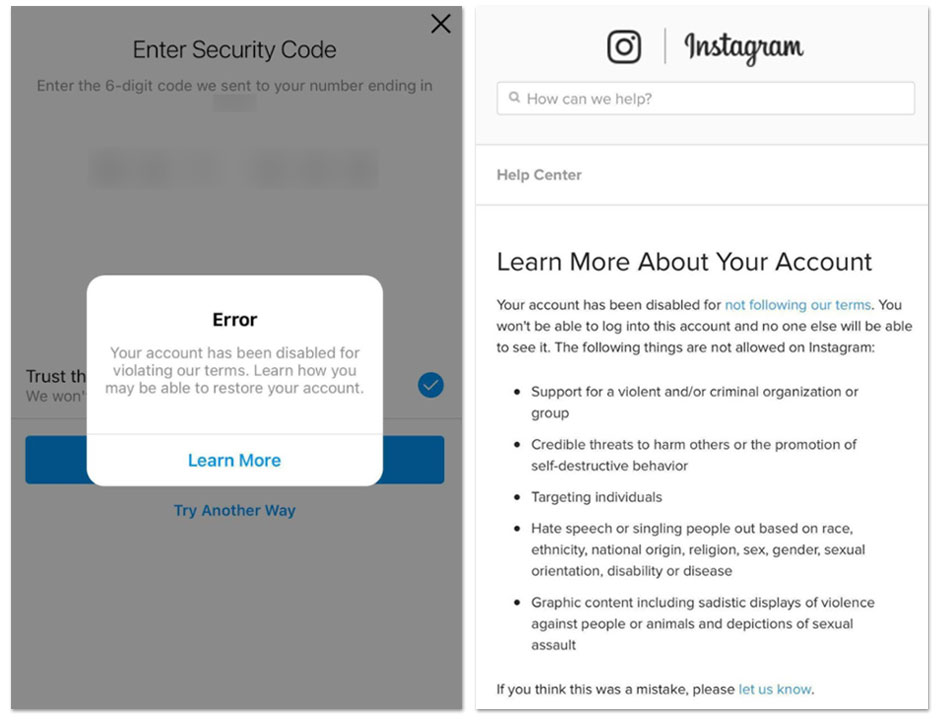 The notification links to a page listing examples of content “not allowed on Instagram,” including “support for a violent and/or criminal organization or group,” “credible threats to harm others or the promotion of self-destructive behaviour,” “targeting individuals,” “hate speech” and “graphic content including sadistic displays of violence against people or animals and depictions of sexual assault.”

The group told PressProgress that Instagram, “said that we were promoting violence. Which we definitely aren’t.”

“We’ve sent an appeal to Facebook and are in touch with one of their representatives,” the group told PressProgress on Wednesday. The group’s page was restored without explanation the next day.

Joshua Wright, a spokesperson for the group, said he believes the page was taken down because of the video showing police violence.

“It’s crazy that in an attempt to censor violent images, that Instagram is only helping to suppress those experiencing the violence. It’s shameful,” Wright told PressProgress.

A spokesperson from Facebook, which owns Instagram, told PressProgress the company was in the process of “reviewing” the Fairy Creek Blockade account to establish why it was removed.

“There was enough public pressure that they reinstated the account,” the group told PressProgress.

Earlier this month, Instagram came under fire after thousands of Instagram posts related to the National Day of Awareness for Missing and Murdered Indigenous Women, Girls and Two-Spirit People (MMIWG2S), evictions of Palestinians in Jerusalem and protests in Colombia suddenly vanished.

The company said it apologizes for the mistake and has restored the account:

“We apologize to those raising awareness of the Fairy Creek Blockade, who felt like they could not bring attention to this cause. Helping people express themselves and raise awareness on the conversations they care about is at the heart of Instagram. We’ve restored the account.”