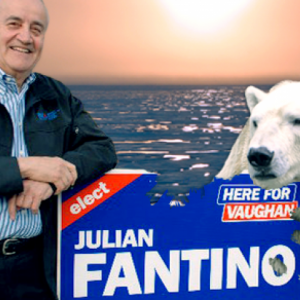 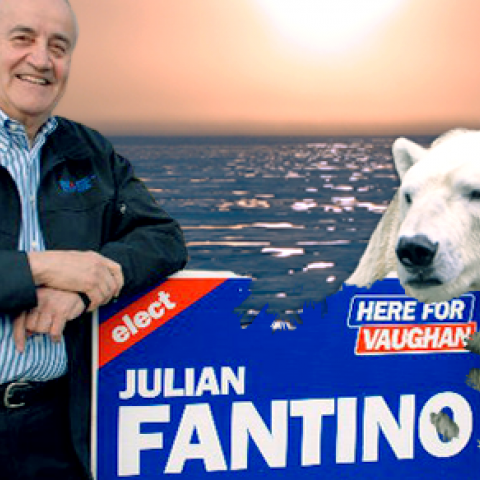 Julian Fantino has had a bad week – a bad year, really. Okay, he’s been downward trending since the day he was elected. With repeated calls for the Veterans Affairs minister to resign after a series of bungles and chatter about a pending Cabinet shuffle, imagine what service Fantino’s “political gifts” could bring to other government […]

Julian Fantino has had a bad week – a bad year, really. Okay, he’s been downward trending since the day he was elected.

With repeated calls for the Veterans Affairs minister to resign after a series of bungles and chatter about a pending Cabinet shuffle, imagine what service Fantino’s “political gifts” could bring to other government portfolios. We enjoy a comedy of Conservative errors, so bring on the shuffle.

Fantino loves dodging questions and reality – and nowhere do the Tories love dodging reality more than on the climate change file. We’ve all seen the images of exhausted polar bears stranded on broken ice due to an ever-dwindling ice flow. Given Fantino’s infamous escape from the wife of an angry veteran, this appointment comes with a bonus: we’d enjoy watching Fantino run away from an angry polar bear.

Sure, Stephen Harper seems to be enjoying Joe Oliver’s performance thus far. But if he put Fantino in charge, the numbers wouldn’t even need to be remotely plausible. “Did we promise $200 million in that budget line? What we forget to mention is that most of it won’t be spent until 2099? Oh, and $20 million of it will be spent in 1962 – as soon as Pierre Poilievre finishes building the time machine he has been working on in his parents’ basement.

When facing a furor over veteran’s funding in Question Period, Fantino was safely in Europe attending a Second World War commemoration. As the new government health care czar, he could take his “fly away tactics” to a whole new level. If a major homegrown health crisis emerges, Fantino can carefully avoid the line of fire by taking an ill-timed getaway – maybe to a European spa. It would do wonders for his complexion while simultaneously allowing for no accountability. (Bonus: unlike the incumbent minister, Fantino wouldn’t be in the House. He’d be taking a mud bath, so no need to apologize for reading a newspaper in QP.)

Next time the government wants to create an ill-conceived prostitution bill, or needlessly go to war with the Supreme Court, Fantino’s duck-and-cover strategy could come in handy.

Minister of Keeping Peter MacKay Away From A Microphone:

If you’ve been living on another planet, and need to understand why this new portfolio is needed, we explain here. But what better way to keep MacKay from screwing up then by sending in a gaffe-prone minister to always speak for him (this strategy already worked so well during the F-35 debacle)? Fantino can’t really sink any lower, so he might as well soak in MacKay’s scorn, too. The Tories can turn political lemon into lemonade. Drink up.

We haven’t had one since the Tories came to power. But think of all the finger pointing Fantino could shrug off as Harper’s defacto #2? Fantino notoriously skipped out of a scheduled meeting with veterans in January; in this lofty portfolio, he could skip loads of important meetings and questions. In this honourary position, Fantino could take a lead role in QP poorly answering questions on multiple files. Let the man embrace his talent.

Maybe the Tories should just give Fantino all the ministries they don’t want to answer questions on? That way Harper can simply introduce a new, leaner, two-person cabinet.

Fantino could simply resign his seat and be appointed to the Senate! Conservatives in the Upper Chamber have had such a long, rough stretch, Fantino’s fumbling presence would barely cause a ripple. (We’re expecting a Christmas card from the Prime Minister thanking us for this suggestion).