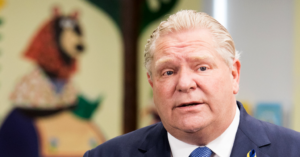 New data released by the Government of Ontario shows Doug Ford did not spend hundreds of millions of dollars officially budgeted for schools and ended up spending $900 million less on education last year than it did the year before.

According to a report released Tuesday by the Financial Accountability Office, Ontario’s education system saw a $900 million reduction in spending that was “largely” attributed to “lower net spending on COVID-19-related programs,” despite higher rates of COVID-19 infection across the province in 2021.

During the same period, COVID-19 caused widespread disruptions in Ontario schools and raised numerous health and safety concerns for students and teachers – teacher absences and staff shortages led some school boards to look to hire “unqualified people” to replace teachers.

The data also shows Ford’s government spent $284 million less on education than it officially budgeted in the full year – $32.563 billion as opposed to $32.847 billion.

According to the FAO report, while some expenses increased, the spending reduction meant less money for capital projects, specifically saving $279.7 million in the quarter on “school board capital grants.”

According to the report, the Ministry also found savings from “support for elementary and secondary education” – the largest item in the education budget which covers educational programming.

Ontario Secondary School Teachers Federation President Karen Littlewood says it was “highly problematic” for the government to shrink its planned spending when schools are understaffed and facing a growing, multi-billion dollar repair backlog.

“This money could have been used for new buildings, but also for new HVAC, AC and other ventilation and air quality improvements,” Littlewood told PressProgress. “The disrepair of schools is not only dangerous for staff and students, but it also impacts the learning environment and student success, including their mental health and well-being.”

“Any cut deprives students of what they need, including cuts to capital budgets. For the past decade, real per-student funding has been cut in virtually every year,” Walton told PressProgress.

“There are 4,800 schools across the province and frontline education workers here are paid on average only $39,000 a year. In the first three months of 2022 alone, the Ford government cut $373 million dollars from education,” Walton said. “This cut is the equivalent of 6,594 education workers that should be in Ontario classrooms – or one full-time and one part-time staff person per school.”

Last May, Ontario’s Financial Accountability Office predicted that based on the Ford government’s predictions, the province’s education system will see a $12.3 billion “shortfall” over the next decade.