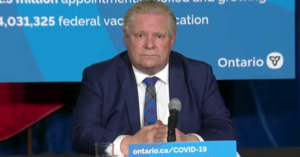 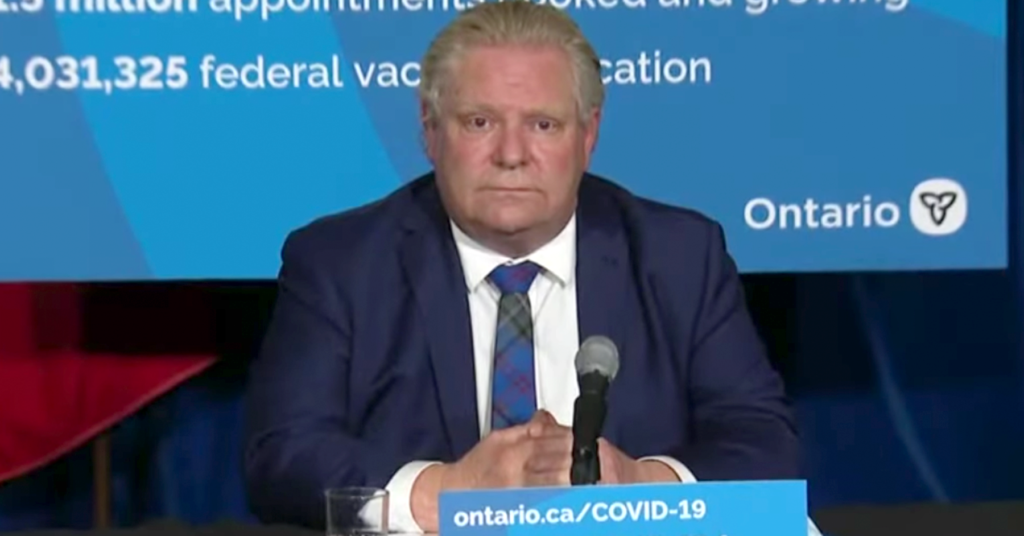 Speaking at a press conference Wednesday to announce new province-wide public health restrictions, the premier took time to publicly denounce a group of people — which includes doctors and local medical officers of health across Ontario — who have been calling on Ford to reinstate paid sick days:

“I want to address something about the paid sick days. You know, my message to the opposition and everyone else, because there’s a lot of people that are playing politics right now and it’s totally irresponsible, they’re doing a disservice to the people that they’re telling this to.”

Ford then proceeded to ask everyone to spread the word about a federal program that is not the same thing as paid sick days and is largely irrelevant to the main problems that paid sick days would help solve.

Yes, Doug Ford is fantastically dishonest, but it’s not even clear he grasps what paid sick days are: pic.twitter.com/7QIgqwYPbu

Medical experts have warned that a lack of paid sick days is forcing many people to go to work when they’re sick or symptomatic, risking greater community spread.

The Canada Recovery Sickness Benefit, the federal program Ford referenced at his press conference, only compensates people after they’ve been infected with COVID-19 or need to self-isolate for extended periods of time.

Ford has offered the same misleading talking point in the past.

Back in February, Ford dismissed paid sick days as a “waste (of) taxpayers’ money” and “not fiscally prudent,” all while falsely claiming it would only duplicate what the “federal program” was already doing.

In January, Ford responded to calls for sick days by insisting the federal program should “get people over the hump for a couple of weeks.”

Public health authorities and municipal leaders across the province have been joining growing calls for the reinstatement of paid sick days in Ontario, something many health workers say would help control the spread of COVID-19 and would actually save the province money, as well as lives, in the long-run.

A #StayAtHomeOrder is needed but won’t help the >2 million essential workers in the GTA, where #COVID19 variants are spreading like wildfire.

Ontario needs a #StayAtHomeOrder, community vaccination plans & #PaidSickDays for ALL workers to slow the spread of COVID-19 variants, save lives & reduce the burden on the #ONhealth system. Here are 5 steps needed NOW via the Primary Care Collaborative: https://t.co/5anwLD448M pic.twitter.com/FMvAh1xrYD

If we don’t pivot vaccines and sick day supports here we’re heading back into the same issue over again.

And by here meaning in person in housing/in workplace vaccine drives, with counsellors on vaccine hesitancy – not mass vax clinics where people have the luxury of time off

Anything short of #PaidSickDays for all is unacceptable.

He promises what?! Yet he ignores the call for #PaidSickDays (so people with precarious employment – essential workers – can’t stay home when they or their kids are unwell). And he has a plan to suddenly accelerate rollout of #CovidVaccine? That’s impossible. They jest.

A recent Toronto Star analysis of public health data showed workplace outbreaks account for by far the highest numbers of COVID-19 outbreaks in the city.