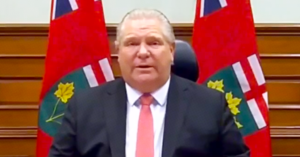 Ontario Premier Doug Ford is doubling down on his opposition to paid sick days.

During an interview with CTV’s Your Morning, Ford dismissed widespread calls for Ontario to legislate paid sick days, calling the idea a “waste of taxpayer dollars.”

Paid sick days have been called for bypublic health officials across the province in response to rising COVID-19 cases. Ontario currently has the highest number of active COVID-19 cases in Canada.

During the CTV morning show on Tuesday, Ford said:

“We aren’t going to duplicate and waste taxpayer’s money, double-dipping into their pockets … Why would I go, or any premier go, into the pockets of the taxpayers and say, by the way, since the federal program isn’t working that well, we’re gonna put a program, we’re gonna ask you for money? It’s unacceptable, it’s not prudent, it’s not fiscally prudent and it’s totally irresponsible for any government to do that.”

There are growing calls for Ontario to implement a paid sick leave program. @fordnation says it would lead to ‘double dipping’ for taxpayers. Click here for our full interview with the Ontario Premier. https://t.co/tuMyV9U30J #COVID19 #onpoli pic.twitter.com/A34xg7AlxR

Paid sick days would allow workers who believe they have COVID-19 symptoms to stay home and prevent spreading the virus at work, advocates argue.

“Workers – especially the essential and frontline workers we rely on every day – need to be able to stay home and self-isolate when they are ill, but many simply can’t afford to,” Toronto City Councillor Joe Cressy, who is also Chair of the Toronto Board of Health, noted last month.

Despite this, Ford has inaccurately claimed that paid sick days would “duplicate” a federal program called the Canada Recovery Sickness Benefit. That benefit offers a maximum of $900 support for up to two weeks, however, it was largely designed to help people who have tested positive for COVID-19.

Earlier this year, Ford told reporters he’s confident the federal $900 benefit will “get people over the hump for a couple of weeks.”

Toronto’s Medical Officer of Health notes only 42% of Canadians have access to paid sick leave — including only 10% of low-wage and frontline workers.

Data from Ontario’s Workplace Safety and Insurance Board finds thousands of Ontario workers have contracted COVID-19 through work-related exposures.

The Premier is on @YourMorning suggesting provincially funded #paidsickdays would mean ‘double dipping’ into the taxpayer’s pocket. In reality, @fordnation has yet to spend billions in COVID relief funds meant to prevent community transmission and help businesses. #onpoli 1/4

On paid sick leave, Ford says: “We aren’t going to duplicate and waste taxpayers money double-dipping into their pockets…it’s unacceptable, it’s totally irresponsible.”
Says feds need to increase their benefit maybe from $500 to $1000 a week, get money to people faster.#onpoli

I was looking at Doug Ford’s talking points on sick days and the phrase “plausible deniability” popped into my mind. It’s odd that there was once a time when the powerful felt the need to make their deceits plausible.