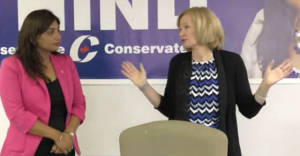 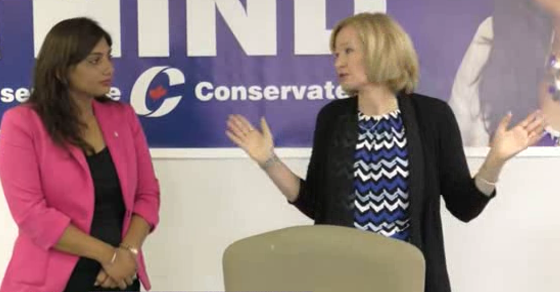 Laureen Harper says marijuana users shouldn't go to jail, but is that in line with the Conservative Party of Canada's current policies on marijuana?

Laureen Harper says marijuana users shouldn’t go to jail, but is that in line with the Conservative Party of Canada’s current policy on marijuana?

“You don’t put people in jail,” Harper is heard saying in a video captured by South Asian media outlet Jhanjar Canada, before reiterating she doesn’t support full legalization either, explaining “there’s a big difference between [putting people in jail] and having [stores that sell marijuana] next to a school or a shopping mall where you go in and buy whatever you want.”


Is Laureen Harper suggesting she supports the decriminalization of marijuana?

And how do we interpret her comments, delivered at a partisan event where she also asked a crowd of volunteers if they have “any policy questions” – does this represent a shift in the official party line?

Harper also criticized the media for spending “a lot of time trying to convince us that marijuana is, like, oh, it’s no worse than alcohol or smoking or anything,” but her view that marijuana offences should not be punishable by jail time seems at odds with the status quo under the Harper Conservatives.

Under Canada’s current laws, a person found guilty of possessing small amounts of marijuana can face up to five years in jail, while first-time offenders can face six months of jail and fines up to $1,000.

Statistics Canada data shows Canadian police laid 57,314 marijuana possession charges in 2014 (plus an additional 10,696 for producing, trafficking or distributing marijuana). Between 2006 (when the Conservatives came to power) and 2012, arrests for marijuana possession ballooned by 41%, although enforcement varies wildly from community to community.

In 2013, the Canadian Association of Chiefs of Police called for amending the Controlled Drug and Substances Act to allow police to ticket marijuana users rather than “the current process of sending all simple possession of cannabis cases … to criminal court.”

In addition to calling the current process “a significant burden on the entire Justice system,” the association pointed out that criminal records can create significant barriers on travel, employment and citizenship.

Although some Conservatives have been pushing behind the scenes to adopt the CACP’s recommendations, last fall Justice Minister Peter MacKay kiboshed any notion of a policy change – “we do not intend to legalize or decriminalize,” MacKay said, explaining the Conservative government’s current position.

One reason Conservatives may not be eager to change their position is it would undermine Stephen Harper’s aggressive anti-marijuana rhetoric.

In August, Harper rejected the idea of relaxing criminal restrictions on marijuana use, stating that “unlike the other parties, we will not introduce misguided and reckless policies that would downplay, condone or normalize the use of illegal drugs.”