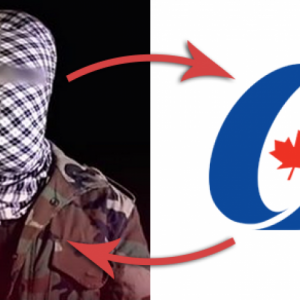 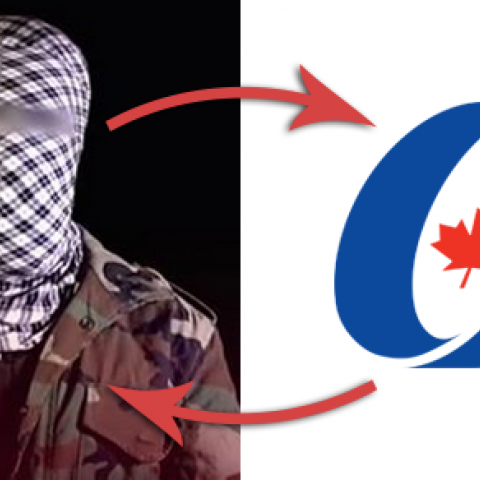 Did Conservatives violate their own terror bill by sharing “terrorist propaganda” on Facebook?

Would Conservative Party of Canada staffers be looking at jail time if Stephen Harper’s terror bill were in place today? Harper’s controversial Bill C-51 includes provisions aimed at “terrorist propaganda” and promoting “terrorist offences in general” that are supposed to target violent ideologues, but have been criticized as being so vague and so broad that […]

Would Conservative Party of Canada staffers be looking at jail time if Stephen Harper’s terror bill were in place today?

Harper’s controversial Bill C-51 includes provisions aimed at “terrorist propaganda” and promoting “terrorist offences in general” that are supposed to target violent ideologues, but have been criticized as being so vague and so broad that they could criminalize legitimate news, speech and debate.

Want a concrete example? The image below appeared on the Conservative Party of Canada’s Facebook page Monday night: Bill C-51 defines “terrorist propaganda” as “any writing, sign, visible representation, or audio recording that advocates or promotes the commission of terrorism offences in general.”

Defending the image, Conservative Party spokesman Cory Hann told CBC News that “we should all be troubled when jihadi terrorists single out very specific locations in our country, and call on their followers to attack it.”

Good to know the Conservatives know they’re making “available to the public” communication that “advocates or promotes the commission of terrorism offences in general” — as C-51 would make illegal.

Also troubling: the image itself offers no cues or context as to who produced it or for what purpose (the image doesn’t even display the party’s logo, for example). When the image of the Al-Shabaab militant’s ‘call to action’ is separated from an accompanying blurb and link to a petition about protecting us from the “threat of terrorism,” the image becomes virtually indistinguishable from the kinds of violent, radical propaganda floating around social media that C-51 is supposed to stamp out.

But the blurb accompanying the CPC image may be irrelevant in the eyes of the law, given the actual wording of the terror bill: Bill C-51 only states that “communicating statements” that “knowingly advocates or promotes the commission of terrorism offences in general” is punishable by up to five years in jail.

So if there is a difference between quoting a terrorist’s call to arms to criticize terrorism rather than promote terrorism, Bill C-51 offers little clarity to this distinction.

In fact, it’s been pointed out that acting in the public interest (as journalists tend to do) does not qualify as a valid defence under C-51.

As C-51 is worded, it would appear that it’s up to the discretion of law enforcement and the courts on how to interpret this — and who knows how evenly this could be applied now or in the future?

Bill C-51’s section 83.221, criminalizing the promotion of terrorism, has been criticized by 100 Canadian legal experts and analysed at length by law professors Kent Roach and Craig Forcese. (It has been blasted by prominent conservative voices, too).

Roach and Forcese point out that, the way it’s worded, you don’t need to intentionally promote terrorism to be in violation of section 83.221 — the wording is so vague and so broad that you could be accidentally guilty of a crime because you’ve communicated something that may inspire someone to possibly carry out an act of ideologically-motivated violence (even if they don’t).

They zero in on C-51’s slippery use of the word may — pointing out that C-51’s language is so loose it could mean that anyone talking about “the concept of political violence” in general could be found guilty of promoting terrorism — if they’re aware there’s a “possibility that someone (and indeed, anyone) might commit a terrorism offence as a result of the communication.”

C-51 becomes even sloppier when you realize that the “possibility that someone might commit a terrorism offence” also includes the “possibility that someone (perhaps a deluded or mentally instable person)” may possibly act on your words in ways you never imagined possible. Roach and Forcese say C-51 covers broad scenarios like these by labelling them as “reckless” communication.

In other words, anyone writing about terrorism in the media, anyone blogging about things they read in the news, anyone sending tweets into the twitterverse, anyone sharing their thoughts on Facebook (and this includes Conservative MPs, by the way) could accidentally run afoul of the law because they said something, quoted somebody, re-posted something or shared a link to something that may inspire someone to possibly “commit a terrorism offence as a result of the communication” — even if no one ever does.

The Conservative government shut down debate on Bill C-51 at the end of February, and have limited the days of expert testimony to be heard by a House committee.