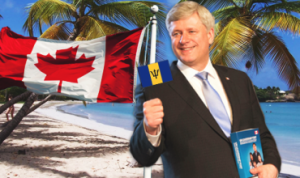 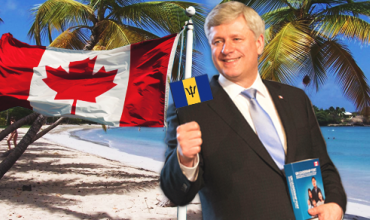 Isn’t this curious? Despite claims that raising corporate taxes will lead to “capital flight,” Corporate Canada has managed to smash its old record, sending close to $200 billion to tax havens – even as Canadian corporations enjoy their lowest tax rates in recent history  (and among the lowest in the world) thanks to Stephen Harper’s Conservatives. New data from Statistics Canada show the amount of money flowing […]

Despite claims that raising corporate taxes will lead to “capital flight,” Corporate Canada has managed to smash its old record, sending close to $200 billion to tax havens – even as Canadian corporations enjoy their lowest tax rates in recent history  (and among the lowest in the world) thanks to Stephen Harper’s Conservatives.

New data from Statistics Canada show the amount of money flowing from Corporate Canada into the world’s top 10 tax havenshit a record $199 billion last year. And if that doesn’t surprise you, get this: the second biggest destination for money flowing out of Canada is now Barbados.

Yes, that needs to be put in bold – foreign direct investment in the tiny island nation of Barbados ($71.2B) is second only to the United States ($350B) and is actually greater than the amount of money Canadian companies invest in China, Germany, Brazil and Mexico combined.

And rounding off the top five? Two more tax haven countries: the Cayman Islands and Luxembourg:

Dennis Howlett, Executive Director of the tax watchdog group Canadians for Tax Fairness, explains that although “a small portion of the money in tax havens may be legitimate investments, such as in resorts or operating businesses, most of it is there to avoid paying taxes back home in Canada.”

“Walk down a street in Cayman Islands and you will see very little evidence of $36 billion in Canadian investment. But what you will see are small buildings with hundreds of mail boxes that are head office to more than 18,000 shell companies – most of them subsidiaries of corporations trying to avoid tax,” Howlett adds.

Toby Sanger, an economist at the Canadian Union for Public Employees, told PressProgress these numbers represent a “low-end estimate of how much Canadian cash is held in tax havens.” That’s because they only include “officially reported assets held by Canadian companies overseas” and don’t peg down numbers for individuals or other funds not reported by companies in “these notoriously secretive tax havens.”

Sanger questioned the Conservative government’s treaties with countries like Barbados, suggesting these have led to “greater avoidance of Canadian taxes by those corporations” rather than “real investment.”

How could that be possible? Well, as CBC reported in 2013:

“Canadian companies have flocked to Barbados with their cash in order to legally avoid paying Canadian taxes. If a Canadian company wants to expand its business outside of Canada, it can create a subsidiary in Barbados where it can park its international profits. This way, it legally doesn’t have to pay Canadian taxes on those profits.”

The Conservative government insists they have “a strong record of combatting tax evasion and getting tough on tax cheats.”

But that claim is difficult to square with Conservative cuts to Canada Revenue Agency, including $250 million in cuts and 300 jobs eliminated in the CRA division responsible for investigating offshore tax dodgers. Internal records show the Conservatives are folding their international tax evasion units and cutting 50 “highly-trained” senior managers.

Instead, CRA set up a 1-800 tipster hotline in the hope of catching tax cheats. After half a year, the phone number received 1,000 calls, 300 of which were from actual informants.

That may explain why former Parliamentary Budget Officer Kevin Page was stonewalled when he tried to get CRA to disclose data that would allow the PBO to calculate exactly how much money Canada is losing due to tax avoidance. The agency even told Page it had no estimate of how many tax dollars could be missing. Senator Percy Downe recently tabled a private bill that would seek to force CRA to hand over data that would allow the PBO to estimate the so-called “tax gap.”

But it’s not clear the Conservatives take the issue very seriously.

For example, Senator Mike Duffy’s recently disclosed ‘diary’ notes he communicated with the Minister of National Revenue’s Chief of Staff in 2012 for help on a speech “defending CRA” from Senator Downe’s “attacks re: offshore tax cheats”:

Meanwhile, as Conservatives avoid cracking down on corporate tax dodgers, they continue to use CRA to lead a witch hunt against charities – something Duffy appears to have had a hand in, as well.

But while money flowing into tax havens increased, there was one tax haven country that saw a slight decline last year: Luxembourg.

Why Luxembourg? Well, one clue is Luxembourg was the subject of a massive leak of offshore tax data in 2014 and covered extensively by the International Consortium of Investigative Journalists and the CBC here at home.

Over 500 global companies were exposed in the leak. Heck, even federal crown corporations wet their beaks in Luxembourg too.

But who knows – maybe it’s all just a neat coincidence money was shifted out of Luxembourg after the offshore tax data was leaked?