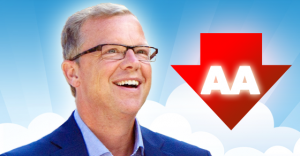 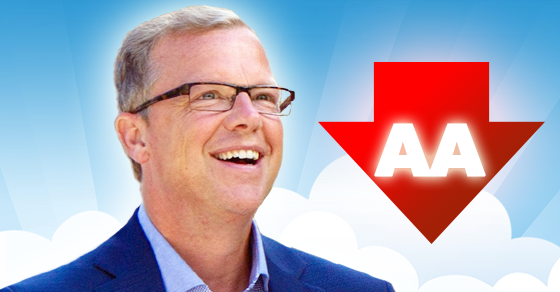 But isn't it strange to see conservative pundits and politicians – who usually get so worked up about about these sorts of things – so quiet and so subdued all of a sudden?

Thanks to the continuing impact of low natural resources prices, Saskatchewan is of course not the first province to see its credit rating drop.

But it’s a little strange to see conservative pundits and politicians – who usually get really worked up about about these sorts of things – so quiet and so subdued all of a sudden?

The news is pretty awkward for Saskatchewan Premier Brad Wall too. He often touts his S&P rating as proof that he knows what he’s talking about when it comes to the economy:

Only 3 provinces have S&P’s highest credit rating of AAA: BC, Alta & SK. Only 1 of those 3 has potash, a giant gopher and the CFL’s #1 team

Sk’s financial position is strong. We now have the highest possible credit rating with both major rating agencies. pic.twitter.com/chstSEELhS

It all makes you wonder: how would conservatives react to this news if Brad Wall didn’t subscribe to the same conservative economic philosophy that they do?

Here are a few ideas:

Would Stephen Harper say Brad Wall has done the “unthinkable”?

When another province which shall remain nameless recently saw its credit rating downgraded, former Prime Minister Stephen Harper was aghast, absolutely aghast, remarking that what he was witnessing would be “unthinkable a generation ago.”

“Unthinkeable a generation ago” that Ontario’s credit rating got downgraded. @PMHarper links @Kathleen_Wynne to @JustinTrudeau

Would Joe Oliver be “unhappy” with Brad Wall?

What do you think: would Harper’s former Finance Minister Joe Oliver say he’s happy or unhappy with Brad Wall?

When low oil prices led to Alberta’s credit rating getting downgraded last year, Wildrose leader Brian Jean and finance critic Derek Fildebrandt said it was a “wake-up call” that the Alberta government had become too “expensive” and “wasteful.”

Someone from Wildrose will get Brad Wall on the phone and tell him the same thing, right? Right?

Although they mismanaged Alberta for decades, the Alberta PCs reacted to Alberta’s downgrade by claiming it was “a major blow to our economy.”

WOULD BRIAN PALLISTER TYPE SOME THINGS IN CAPS LOCK?

Earlier this year, Pallister reacted to “ANOTHER” credit downgrade by warning that the credit agencies “DON’T TRUST THE GOVERNMENT” – someone needs to get this thing “UNDER CONTROL!”

#mbpoli: Moody’s warned of ANOTHER downgrade of MB’s credit rating if there is “greater accumulation of debt beyond the existing plan”…

The right-wing taxpayers federation has previously likened a credit downgrade is a “devastating blow to our reputation and our pocket books.”

They’ve also celebrated Saskatchewan’s credit rating as a “huge feather in its cap.”

But look what happens when Saskatchewan’s credit rating is downgraded: the taxpayers federation quietly posts a news release on their website criticizing Alberta and Ontario for “racking up reckless deficits” while applauding the Saskatchewan government’s “commitment to transformational change” as “good.”

And, hey: would we see “soup kitchen” lines in Saskatoon too?

So, of course Goldstein is expecting to see soup kitchen lines in Saskatchewan now that S&P has downgraded their credit rating too, right?

Nope. Doesn’t look like this credit downgrade gets a soup kitchen line warning: