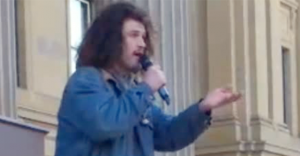 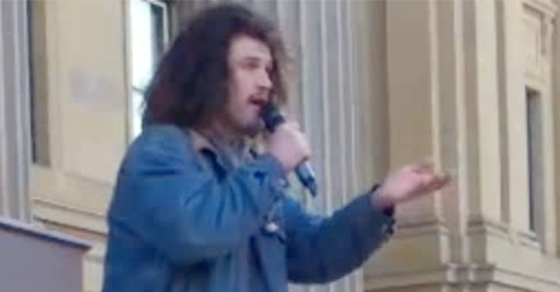 "You guys have any friends who are conservatives, who are computer hackers? We need their help."

Some may call the idea over-the-top, others may call it illegal.

Standing on the steps of the Alberta Legislature in Edmonton Saturday, one speaker at a rally organized by Ezra Levant’s alt-right Rebel Media website encouraged conservative “computer hackers” to launch cyber attacks against the Government of Alberta.

“You guys gotta start getting involved,” shouted guest speaker Neal Hancock. “It’s not enough to talk on Facebook or show up to a rally.”

Hancock urged the crowd to elect right-wing candidates to “school boards” and at the “municipal level,” before suggesting another way they can “participate” in the democratic process:

“You guys have any friends who are conservatives, who are computer hackers? We need their help, because I know there’s a bunch of stuff they can dig up on what’s going on in that building.” Hancock, a Bishop’s University student with acting experience in Quebec’s theatre scene, is lately better known by his alter-ego “Bernard the Roughneck” – a disheveled dandy who claims to challenge stereotypes about oil rig workers.

Hancock has frequently appeared at events in support of the federal Conservative Party of Canada and Alberta’s provincial Wildrose Party, describing himself as “the voice of the oil patch.”

Only a month ago, Hancock delivered the opening speech at the Wildrose Party’s 2016 Annual General Meeting where he endorsed Jean’s leadership and quoted existential philosopher Jean-Paul Sartre: A month earlier, the Canadian Association of Oilwell Drilling Contractors paid to fly Hancock to Ottawa where he appeared alongside federal Conservative MPs for a press conference on Parliament Hill wearing coveralls, a hard hat and his face inexplicably smeared with grease.

Although his travel costs were paid for by lobbyists, Hancock insisted he’s “not a lobbyist”:

“Hancock is adamant that he is an unofficial and unpaid spokesperson for the oilpatch, and has “taken no money” from the Canadian Association of Oilwell Drilling Contractors (CAODC) — the organization that brought him to the nation’s capital this week.

He said CAODC paid for his flight from Grande Prairie, Alta. and covered his Ottawa hotel.” In addition to calling for “computer hackers” to target the Government of Alberta, Hancock also threw both his shoes at the Legislature and read passages from the Book of Jeremiah to the crowd.

As Hancock wandered away from the podium to retrieve his shoes, Levant reminded the crowd to “obey the law,” adding that “our side does, but the other side does not.”

Wildrose leader Brian Jean accepted an invitation from Rebel Media to speak at their rally, telling CTV Edmonton he’s just as “happy to speak to Rebel listeners” as he is to speak to anyone else.

Also in attendance were Conservative leadership candidates Chris Alexander and Andrew Saxton, a number of Wildrose MLAs and federal Conservative MPs, along with a colourful cast of characters displaying a range of thoughtful opinions: