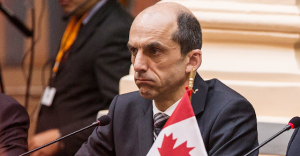 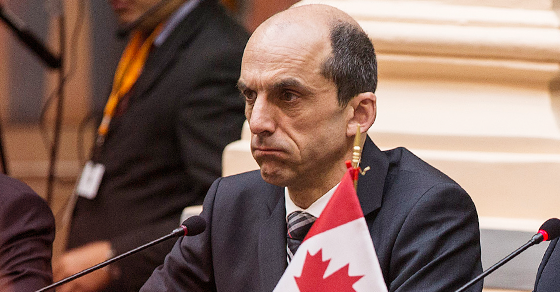 You know who must be really happy it's the weekend? Conservative Public Safety Minister Steven Blaney.

You know who must be really happy it’s the weekend?

First, Blaney accused the NDP and 200 civil society groups of “siding with the terrorists” because of their opposition to C-51.

Then, just as the Conservative government’s unpopular Bill C-51 officially became law, Blaney went on CBC’s Power and Politics Thursday and boldly stated — with a straight face — that the new law would actually increase oversight of Canada’s intelligence agencies, despite this being a key criticism of many prominent critics.

Even more bewildering? Blaney told Canadians a different story about oversight just a few month ago.

Back on the February, Blaney told Robert Fife, host of CTV’s Question Period, that no new oversight is needed as it would be nothing more than “duplication” (another Conservative MP appearing on the same program went so far as to call oversight “needless red tape”).

So there are two different stories from Blaney. What do others think?

“National security agencies, like all government institutions, must be accountable to the public. Accountability engenders public confidence and trust in activities undertaken by the government, particularly where those activities might be cloaked in secrecy. Independent checks and balances ensure that national security activities are protecting the public, and not just the government in power. Oversight and review mechanisms are necessary to make sure that powers are being exercised lawfully, and that government officials are not called upon to undertake activities that might expose them or Canada to legal liability either at home or abroad.”

“C-51 does not introduce new reforms in [oversight]. The government instead points to judicial warrants authorizing the new CSIS powers – a form of oversight. But this is, at best, a partial form of oversight. CSIS will not always require warrants. Judges will issue warrants in secret proceeding in which only the government side is represented. Nor will they always know what is then done in their name. There is no formal “feedback” loop between CSIS and the judge concerning the execution of the warrant, a key concern where (as with CSIS warrants) the conduct is covert and the warrant never disclosed.

In these circumstances, accountability depends on review. “Review” is an audit of past performance, to ensure compliance with law and policy. CSIS’s review body is SIRC. The idea that SIRC review is adequate and enhanced review is needless red tape is simply wrong.”

While the potential to know virtually everything about everyone may well identify some new threats, the loss of privacy is clearly excessive. In a country governed by the rule of law, it should not be left for national security and other government agencies to determine the limits of their own powers.

We need to create clear and reasonable standards for what personal information may be collected, shared, used and kept. We also need to ensure appropriate oversight and review. Currently, 14 of the 17 agencies that will receive information under the proposed law are not subject to independent oversight.