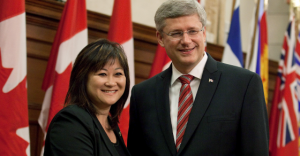 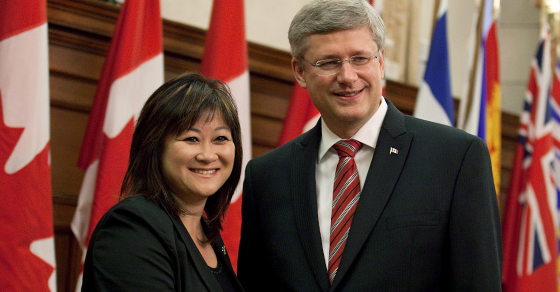 Jesus saves, but did you know Bill C-51 saves too? That's apparently Conservative MP Wai Young's big takeaway from "all the stories in the Bible."

Jesus saves, but did you know Bill C-51 saves too?

That’s apparently Conservative MP Wai Young’s big takeaway from “all the stories in the Bible,” telling a church that the new surveillance and security powers contained in the controversial Bill C-51, as well as the Conservatives’ less than forgiving sentencing laws, are examples of how her party is working “in the same vein” as Jesus Christ.

“Jesus served, he saved, but he acted, as well,” Young told the congregation in a recent speech at Harvest City Church, a non-denominational church in her Vancouver South riding.

“I want to share with you what I think our government is doing in the same vein – Jesus served and acted to always do the right thing, not the most popular thing.”

“We will always act and do the right thing,” Young continued, explaining that “we’ve strengthened the consequences for crime and dangerous offenders at every turn where possible” and “enacted Bill C-51.”

Young also told the congregation that “if Bill C-51 had been in place 30 years ago, Air India would never have happened. Those some 400 lives would have been saved.”

Yet some would beg to differ.

And some security experts think C-51 will actually create more problems for law enforcement. “This is going to impede, not facilitate, any actions against terrorism because it’s going to reintroduce the turf wars between the RCMP and CSIS,” security and intelligence expert Reg Whitaker told the Georgia Straight in March.

But despite expert opinion, one reason Young may nonetheless believe her statement is factual could be because she does not, in fact, read newspapers.

“I do not read the newspapers anymore,” Young told the congregation, “because most of the facts in there are not factual.”

“One of the key tenets of being a journalist is that you are supposed to be reporting to facts,” Young explained. “Well I have personally experienced and seen in the last four years of being in Ottawa the fact that journalists all think that they’re columnists, they all think that they have their slant or their way or their tweak to say what they want to say and that’s how they present their story.”

“They no longer present the facts.”

Our #canadaday celebrations came early at @harvestcity as we had @WaiYoung speak as our special guest #vancouver pic.twitter.com/owLDfyEge7

However, it is not clear exactly when Young’s boycott of the news began (or ended).

In the weeks leading up to her her appearance at Harvest City Church, Young tweeted several news stories, even re-tweeting a link to a CBC news story three mere days before telling the congregation otherwise.

Since that day, Young has shared two separate news stories and accompanied Justice Minister Peter MacKay at a press conference.