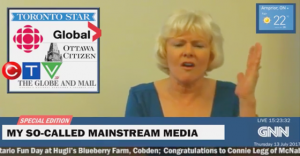 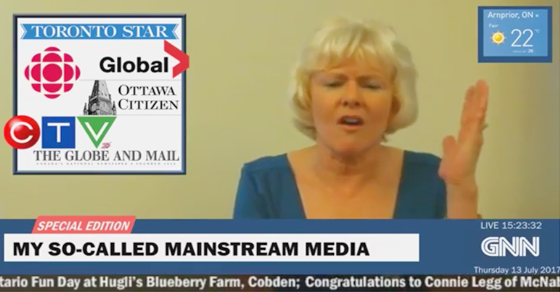 Conservative MP Cheryl Gallant says the “elite-stream media” is broadcasting “fake news” on behalf of the Trudeau government, all in an effort to secure “hundreds of millions of dollars in subsidies” for Canadian media companies.

Without providing evidence supporting her allegations, the MP for the Ottawa Valley riding of Renfrew-Nipissing-Pembroke also claims the media and the government are in “collusion.”

“Are the media stuck in a Liberal bubble or just looking for a payout?” asks the headline of a video streamed live on Facebook this weekend featuring Gallant as the anchor of a CNN-inspired newscast called “Gallant Night News” – or “GNN” for short. Broadcasting “live from Parliament,” Gallant suggests journalists working for CBC News, CTV News, the Globe and Mail, Global News, the Toronto Star and Ottawa Citizen are publishing “fake news story after fake news story” about Omar Khadr, a former child soldier who was imprisoned and tortured for a decade in Guantanamo Bay, in an effort to “justify” the Trudeau government’s out-of-court settlement and convince Canadians to “accept the payout.”

“They’ve been working overtime trying to media-splain why you should zip it and just accept the payout,” Gallant says. “They brought out fake news story after fake news story, they claimed it was all somehow Harper’s fault.”

According to Gallant, Canadian media outlets have designed a “carefully laid plan to keep the Liberals in power” in exchange for “hundreds of millions of dollars in subsidies” – subsidies that would disappear if outrage over the Khadr settlement returned Conservatives to power:

“Now Trudeau is elbowing aside their carefully laid plan to keep the Liberals in power in return for hundreds of millions of dollars in subsidies. They know that if the Conservatives are elected, there won’t be a gravy train.”

Without specifying, Gallant also praises unnamed “rebel” media outlets that she claims provide “alternatives to the elite-stream media” and encourages viewers to spread the word so others can “learn the truth about what’s going on”:

“We are already seeing some of these new media companies rebel against the elite-stream consensus. They’re thriving and growing while the old media continues to shed jobs … Only by getting the word out about alternatives to the elite-stream media will more and more Canadians learn the truth about what’s going on.”

Gallant has already posted several episodes of her “GNN” newscast this summer.

In June, Gallant claimed the Trudeau government will “work hand in glove with the CBC trying to trap Andrew [Scheer].”

On another episode of her newscast, Gallant stated that “the so-called mainstream media works hand-in-hand with the Trudeau Liberals to berate gun owners.” Special guest Tony Bernardo of the Canadian Shooting Sports Association later tells Gallant that the government is “losing control” of the RCMP and said Canada is “looking like a police state.”

In the same episode, Gallant observes that fighting climate change and legalizing marijuana at the same time seems like a “paradox”:

“By virtue of lighting up a joint, quite apart from all the negative health benefits, we have a new law that in and of itself promotes the emissions of carbon dioxide.”

Although the “GNN” videos purport to be broadcast “live from Parliament,” it remains unclear whether Gallant’s MP’s office is being used as a makeshift news studio or if the videos are produced using public resources.

Gallant’s office did not respond to multiple requests for comment.