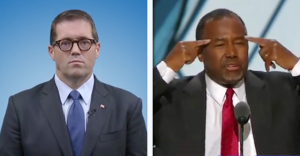 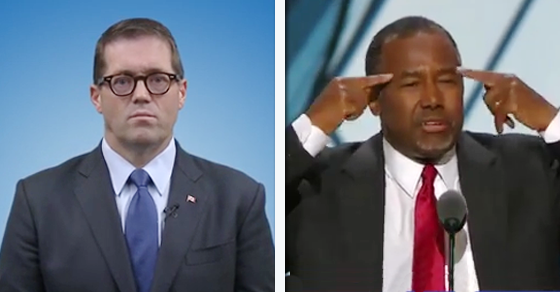 And at least one Conservative MP in Canada found himself nodding along in agreement.

Reacting to a speech that saw the failed GOP presidential candidate and Egyptian pyramid truther finally connect the dots and link Hillary Clinton to Satan, Conservative MP Bob Zimmer tweeted that Carson’s condemnation of a so-called secular agenda was on point.

Zimmer, who was in the news recently for his efforts to get the AR-15 rifle reclassified as a hunting weapon, was responding to a Fox News video of Carson denouncing the so-called secular agenda and the way it wants to make “people sit down and shut up while they change everything.”

That’s a bit troubling considering Carson’s speech went on to criticize that same secular agenda for separating church from state – you know, that concept that makes democracy totally different from, say, a theocracy:

“The secular progressive agenda is antithetical to the principles of the founding of this nation. If we continue to allow them to take God out of our lives, God will remove himself from us, we will not be blessed and our nation will go down the tubes and we will be responsible for that.”

Carson later reiterated to the Washington Post the same agenda is working “to remove God from the public square” and that’s “not consistent with the principles that established this country.”

But as many observers noted, none of Carson’s gibberish is actually in line with the democratic principles America was founded on:

Dear Ben Carson: Jefferson coined the phrase “separation of church and state”, and held that line. Put that in your fruit salad. #RNC2016

“Hillary Clinton loves Lucifer” “secularism is antithetical to America.” Ben Carson. THE FOUNDERS WERE DEISTS, you shame upon brain surgeons

I love how Ben Carson says “secular progressives,” as if blue-state America has no spiritual foundation for its mutual respect of others.

Zimmer also took the time to extend his well-wishes to Donald Trump – as it happens, the only member of the Conservative caucus who appears to have chosen to do so:

Congratulations to @realDonaldTrump on your victory receiving the Republican Party nomination today!

Unfortunately, Zimmer had nothing to say about the hundreds of controversies that have led over 80% of Canadians to conclude Trump is a bonafide racist who also discriminates against women.

Even a majority of Conservative supporters say they’re not in a celebratory mood about Trump too.