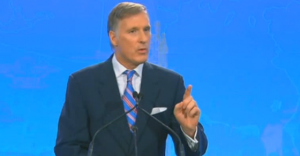 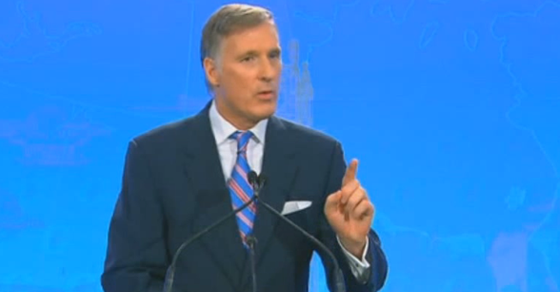 If elected, Conservative leadership candidate Maxime Bernier says he’ll change the law and make it easier to discriminate against people based on their gender.

In a Facebook post Sunday, Bernier promised to “repeal” Bill C-16, a law adding gender identity and expression to the Human Rights Act and Criminal Code – something he actually voted for last October.

Now that he’s running for leader, Bernier has had a sudden change of heart, warning that the bill protecting transgender Canadians from hate crimes and workplace discrimination “could force Canadians to restructure the way they talk and say things they do not believe.”

And after meeting with controversial University of Toronto professor Jordan Peterson, Bernier says he’s suspicious of this “crazy trend” involving people “who refuse the usual categories of masculine and feminine” too.

Bernier adds that he now believes C-16 advances the goals of “radical left-wing activists” who are “not fighting for equality of rights and respect for sexual minorities,” but instead working to undermine “traditional social norms”:

“There has been a proliferation of groups that claim various sexual identities in recent years. Some of these groups are not fighting for equality of rights and respect for sexual minorities. They are radical left-wing activists trying to deconstruct traditional social norms and impose their marginal perspective on everyone, including by forcing us to change the way we talk. And they seem to have an undue influence on campuses across North America, including here in Canada.”

One problem with all of that – legal experts have repeatedly pointed out that Peterson, who specializes in psychology and not law, is “fundamentally mischaracterizing” what Bill C-16 actually does.

University of Toronto law professor Brenda Cossman says Peterson is either “misunderstanding” or “mischaracterizing” the law when he claims C-16 criminalizes speech and that simply misusing pronouns could land you in “jail” – Peterson would need to commit a hate crime before “jail time” would be on the table.

“The misuse of pronouns is not equivalent to advocating genocide,” Cossman told the Torontoist. “If he advocated genocide against trans people, he would be in violation, but misusing pronouns is not what that provision of the code is about.”

Interpreting the act in a 2013 case, the Canadian Supreme Court found that for someone to be in violation their actions need to be actively harmful or encouraging hatred:

“People are free to debate or speak out against the rights or characteristics of vulnerable groups, but not in a manner which is objectively seen to expose them to hatred and its harmful effects.”

Penalties for such violations can include fines or mandated changes to hiring practices, not jail time.

But Bernier’s not the only one who’s confused about what human rights laws are all about.

“The purpose of human rights legislation should be, by and large, to restrain the government, not to actually input new discriminations against other people.”