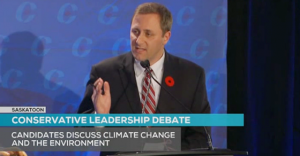 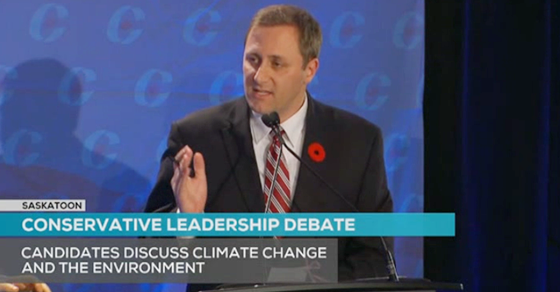 Conservative leadership candidate: climate change is not a ‘scientific issue’

"I don't think man-made greenhouse gases are a problem on the environment."

And from the “little bit” he’s learned about science, Trost has reached the conclusion that climate change is not, in fact, a “scientific issue.”

Here’s what Trost had to say about climate change Wednesday night in Saskatoon during the first Conservative leadership debate:

“When I become Prime Minister, the war on oil and gas and coal is over … Instead of wasting our time worrying about lowering emissions, we will concentrate on environmental priorities that make a difference. We pour billions of gallons of raw sewage into places like the Ottawa River, the Strait of Juan de Fuca, we don’t need to concentrate on climate change – it’s more of a political issue than a scientific issue.”

Oddly, even the oil and gas industry recognizes the science behind climate change and is fully committed to efforts to reduce emissions through carbon pricing.

But a short while later, Trost had this to add:

“I don’t think man-made greenhouse gases are a problem on the environment … I’m being clear I don’t think it’s a priority.”

To establish his authority on the issue, Trost cited his experience as a student of geophysics.

Who disagrees with that analysis? The Canadian Geophysicists Union, for one – they actually endorse the scientific consensus that “climate change has been caused by human action.”

In fact, the CGU joined several Canadian scientific organizations in endorsing a 2009 letter that states:

“Greenhouse gases resulting from human activities contribute to the warming of the atmosphere and the oceans and constitute a serious risk to the health and safety of our society, as well as having an impact on all life.”

In addition to this opinion, Trost also opposes same-sex marriage and has stated he believes “God put conservatives on earth to stop taxes everywhere, forever.”