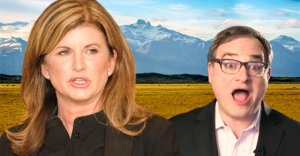 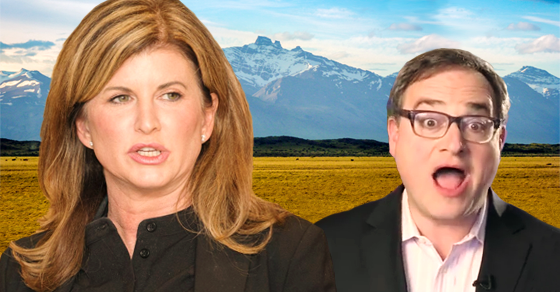 Now we have a basket of idiots too?

Interim Conservative leader Rona Ambrose had some choice words for supporters of Ezra Levant’s Rebel Media this week – and one of the words she chose was “idiots.”

The alt-right website bussed their supporters to a rally at the Alberta Legislature last week, and as you probably already guessed, everything spiraled out of control.

One of Levant’s guest speakers called for cyber attacks on the Government of Alberta, grown men waved signs comparing carbon pricing to “sodomy” in the presence of children and then Rebel Media’s angry mob chanted “lock her up” during a speech by Conservative leadership candidate Chris Alexander.

“It’s not only unoriginal, it’s completely inappropriate. We don’t lock people up in Canada.”

Not only will that one sting, things might get a little awkward.

Following the event, Levant grasped at comments by Maclean’s columnist Scott Gilmore, who compared Alexander’s choice to attend Rebel Media’s rally to lying “down with pigs”:

Gilmore is a “long-time conservative” who also happens to be married to federal Environment Minister Catherine McKenna.

Hillary Clinton calls you “deplorable”. Trudeau’s Liberals call you “pigs”. I call you Canadians and https://t.co/2VDaI9ZRmM is on your side

Guess we can expect Levant to e-mail his supporters telling them Ambrose’s Conservatives think they’re “idiots” too?

Kenney called Levant’s chanting crowd “ridiculous” and “offensive.” And Jean (who spoke at the rally alongside Levant) joined Kenney in denouncing their chants and profane signs, adding that if Rebel Media’s supporters can’t behave themselves, he wishes they “would just stay at home.”

In denouncing the chants, Deepak Obhrai said he was concerned by the “intolerance creeping into Canadian politics,” while fellow leadership candidate Michael Chong said the behaviour of the crowd at the Rebel Media rally was “worthy of a dictatorship.”

Chong ripped Levant and Rebel Media because the chants were “not denounced by rally organizers,” and called on conservative leaders to “stand up against language and behaviour that undermines the rule of law and legitimacy of our political system.”

Since the Conservative leadership race began, seven out of 14 leadership candidates have made appearances on Levant’s website.

Trost tweeted his regret that he could not “be there w my friend” Chris Alexander and said he “would’ve chanted w them.”

Alexander previously stated he was “mortified” by the crowd’s chants.