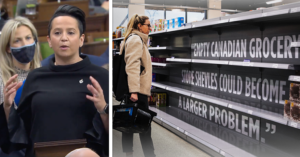 One of Erin O’Toole’s Conservative MPs is holding up a photo of a British supermarket as evidence of “empty Canadian grocery store shelves.”

On January 21, rookie Conservative MP Melissa Lantsman tweeted a petition calling on the federal government to “reverse the mandate” on requirements that truckers crossing the US-Canada border be vaccinated against COVID-19.

Lantsman, a former a corporate lobbyist who served as Doug Ford’s war room director and main spokesperson during the 2018 Ontario election, made headlines during the 2021 federal election going doorknocking with an anti-lockdown MPP who was kicked out of Ford’s caucus for his extreme views on COVID-19.

Lantsman’s tweet included a graphic featuring a photo of a perplexed woman looking at an empty grocery store shelf.

“Empty Canadian grocery store shelves could become a larger problem,” the graphic states. The graphic includes the logo of CityNews, but does not indicate that the image was produced by Lantsman’s office or the Conservative Party of Canada. 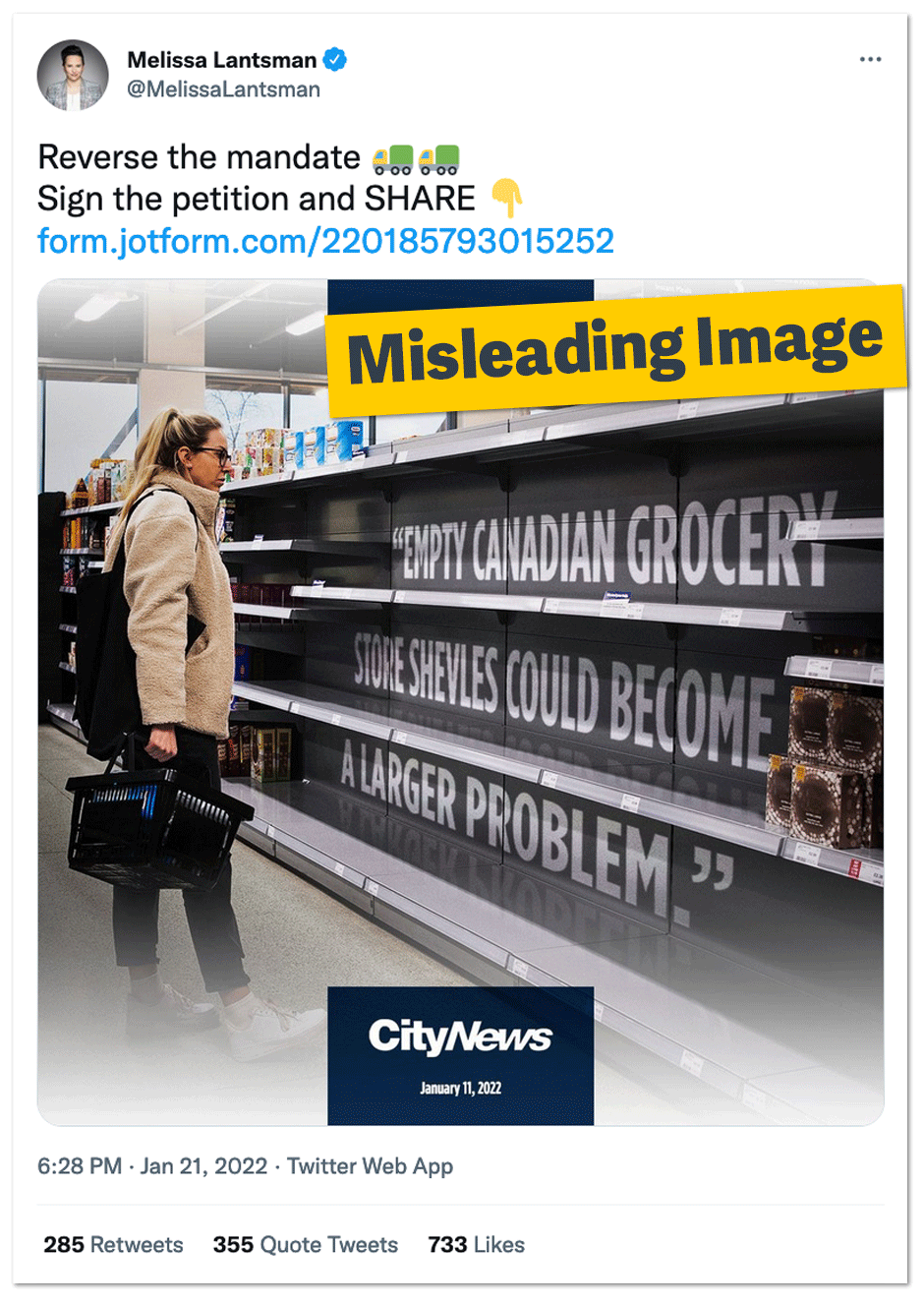 In fact, the photo was not taken by Lantsman or CityNews — it was  sourced from iStock, a popular stock photo service, where it currently sells for $36.

“A young Caucasian female stands looking concerned at the empty shelves in a supermarket,” a description accompanying the stock photo states. 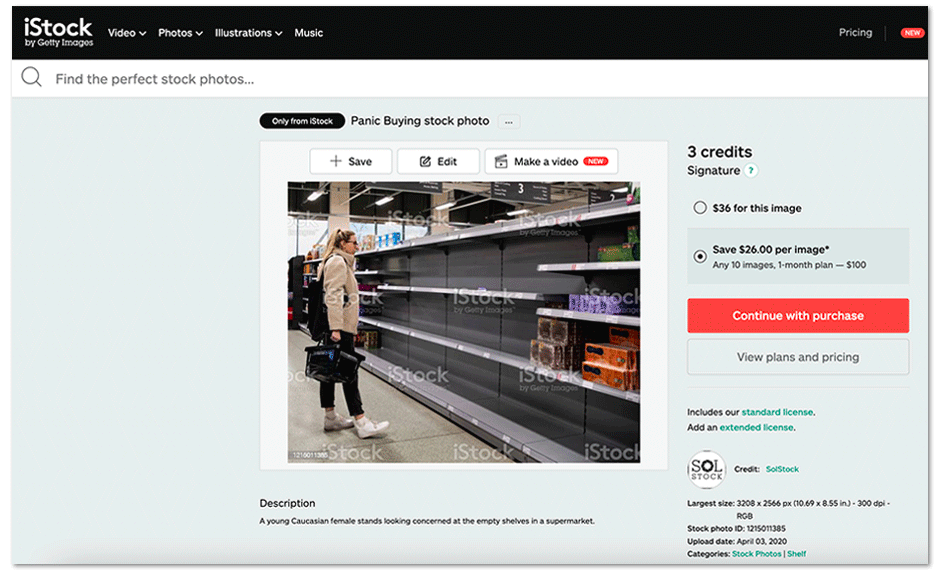 A representative for SolStock, a stock photo company based in the United Kingdom, confirmed to PressProgress that the photo was not taken in Canada.

They indicated the photo was actually taken in Northern England at the Lakes & Dales Co-op supermarket just outside Newcastle in the seaside town of Whitley Bay. 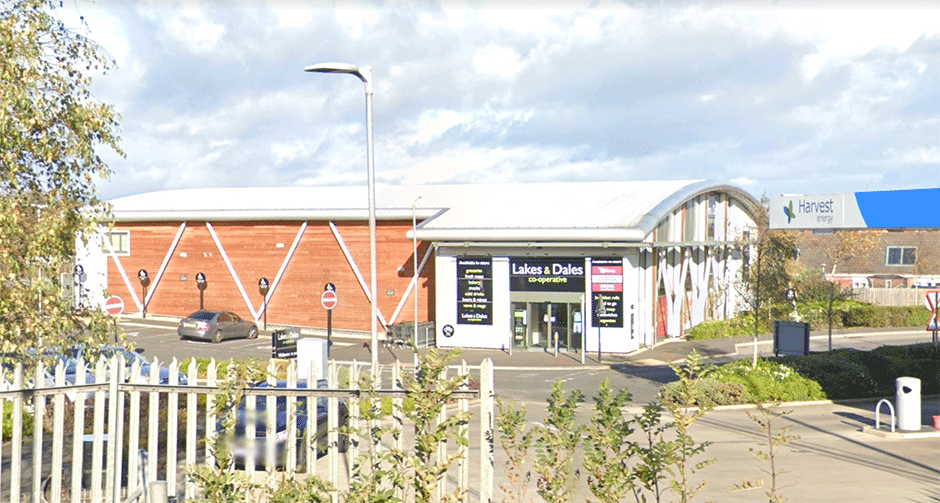 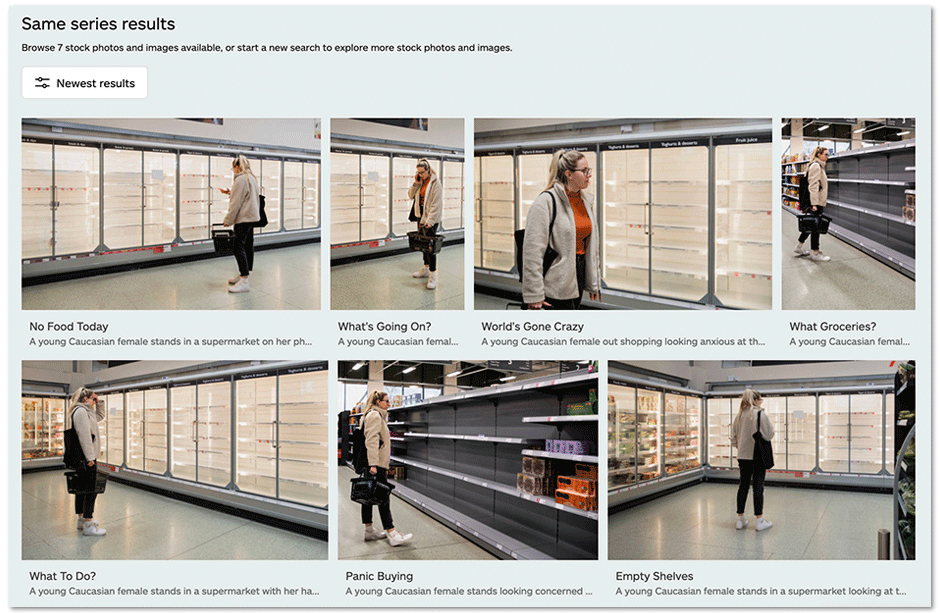 In response to questions about whether her graphic was communicated responsibly, Lantsman provided PressProgress with a statement that did not address those questions, but instead criticized the Liberal government and promoted her petition.

“Our petition from Canadians demanding action in communities across the country continues to grow every hour,” Lantsman told PressProgress.

Over the last week, Canadian conservatives have repeatedly shared misleading and decontextualized photos of grocery stores in an apparent effort to stoke fears of food shortages.

Loblaws clarified the empty shelves were due to delivery delays caused by a snow storm.https://t.co/OYxWEPktEh #cdnpoli #nbpoli

A spokesperson for Loblaws later clarified to PressProgress that the photo was taken following a severe snow storm and deliveries had been temporarily delayed due to inclement weather — the store was restocked later the “same day.”

The local resident who snapped the original photo at the Atlantic Superstore in Oromocto, New Brunswick told PressProgress that Candada Proud did not contact him or verify any details about the photo prior to blasting it out on social media.

Update: This story has been updated to include comments from Melissa Lantsman which were received after publication.