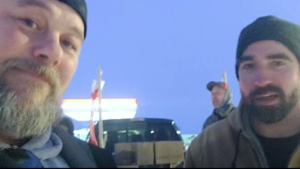 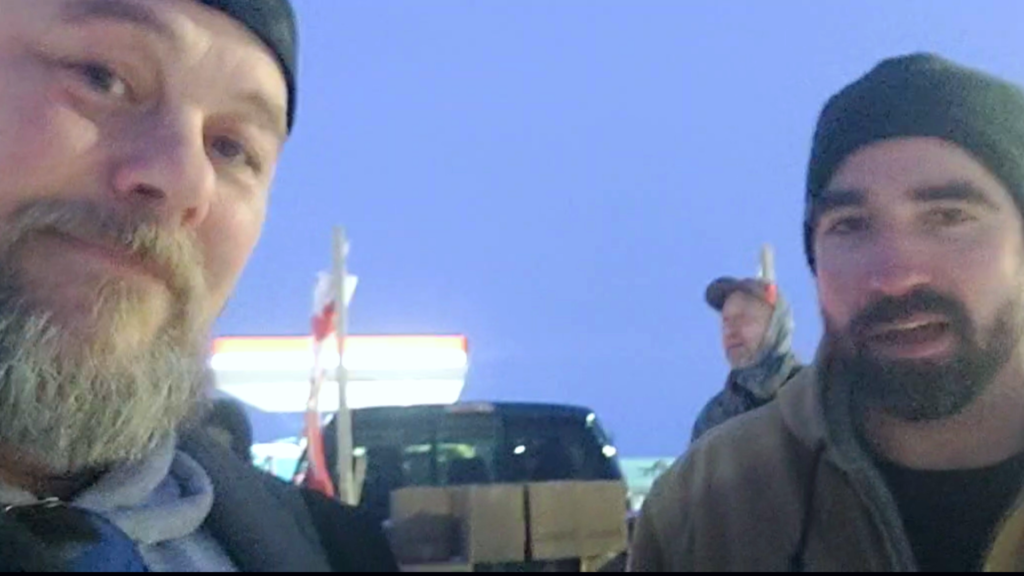 Conservative MP Jeremy Patzer was pictured with Pat King, a former WEXIT campaigner and “Freedom Convoy” activist who said an end to COVID-19 public health precautions may only be achieved “with bullets.”

Today, the “Freedom Convoy” — a rally against vaccine mandates — is set to convene in Ottawa.

Late yesterday, the government’s Sergeant At Arms sent an email to all MPs advising them to avoid the rally and “go somewhere safe.”

This evening, Sergeant-at-Arms Patrick McDonell sent an email to all Parliamentarians ahead of Saturday’s trucker convoy protest.

There have been attempts to collect MPs’ home addresses. As such, the Sergeant-at-Arms is advising to avoid the rally and “go somewhere safe.” pic.twitter.com/xeSk2gVYDv

Despite warnings of possible violence, Conservative Party leader Erin O’Toole announced he would meet the protesters.

He wrote, attached to a Twitter video: “Truckers were our heroes at the start of the pandemic. Now Trudeau and his Liberal allies want to smear and demonize them.”

“This convoy is really about Mr. Trudeau and the fact that people are tired,” O’Toole said.  “There’s a fatigue in this country, there’s division and there’s millions of people who feel they’re no longer being heard.”

But, before O’Toole’s post, Jeremy Patzer, member of Parliament for Cypress Hills—Grasslands, met with the convoy himself, in Swift Current, Saskatchewan.

During his visit, Patzer appeared in a video alongside Pat King — described by the Canadian Anti-hate network as a former Yellow Vester and “a major figure” in the WEXIT movement.

In the video, King asks Patzer why he came down — Patzer replied he was: “Just here to support all the people who are out here looking to get their rights and have their freedom back, it’s fantastic, great crowd, great to see everybody united under one banner here.”

Later in the vide, Patzer told King: “I’ve been in opposition to what Trudeau’s been doing to everything, any of the mandates, any of the lockdowns, provincial or federal I’ve been against them from the start.”

At the end, he tells King it’s “great to be here.”

As the Anti-hate Network notes, King is listed as the contact to join the “Alberta North” portion of the convoy.”

In 2020, however, he appeared as part of a right-wing counter demonstration that confronted an anti-racist protest in Red Deer — remarking: “That’s patriots kicking antifa out of their towns!”

Regarding COVID-19 precautions, King told one Facebook livestream on December 16: “The only way this is going to be solved is with bullets.”

In another video, King advised his followers to stage large gatherings in defiance of public health guidelines. And, should they be reported by their neighbours, King is heard in the video saying “those people need to be shot.”

In an earlier video, King has claimed Muslims have a plan for “Anglo-Saxon replacement,” to “flood [Canada] with refugees,” and subvert Canada’s education system.

King dives head first into the Great Replacement/white genocide myth. It’s all a conspiracy, see. Because whites have “the strongest bloodlines.”

He calls it the “anglo-saxon replacement” so antifa can’t get mad at him.

Who is behind it? Muslims and the UN. /2 pic.twitter.com/mLhpCpjQiV

Elsewhere, King has said the holocaust is “not the 6 million that it was said to be.”

Last year convoy spokesperson Pat King said on stream that the Holocaust was “not the 6 million that it was said to be.” Also invoked the antisemitic conspiracy that Jews secretly control politics. Worth noting on #HolocaustRemembranceDay #cdnpoli source: https://t.co/YpwZPiUKcp

In a statement to PressProgress, Patzer said:

“I have no association with Mr. King, nor any awareness of what he stands for. I was introduced to him by a constituent while attending the Truckers’ Convoy in Swift Current. While I support Canadians’ right to peacefully protest, I fully condemn any violent rhetoric on the part of Mr. King or any other participant of the Convoy.”

“The issue here is that from day one, the convoy has been organized and led by the far right,” Canadian Anti-hate Network executive director Evan Balgord said.

“They need the air of respectability,” Balgord said. “When a politician shows up, they’re lending it an air of credibility and an air of reasonableness. And, then people get sucked in and some of those people may get radicalized.”

So this Tamara Lich running the #FreedomConvoy2022 GoFundMe “has ties” to Alberta’s Maverick Party, formerly known as Wexit, a separatist entity.

I broke a story in 2019 re: who found the Wexit movement. Gives u can idea of where Lich is, uh, coming from:https://t.co/P6QuGMzBvF

King did not respond to requests for comment from PressProgress.